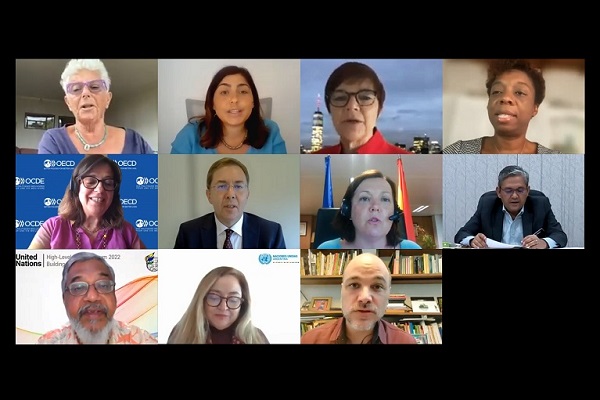 Organized by RIPESS intercontinental, in partnership with the United Nations Task Force on Social and Solidarity Economy (UNTFSSE), the governments of France, Spain and Malaysia, the online side-event was an official side event of the High-Level Political Forum (HLPF2022). An annual event and platform of the United Nations organized for the follow-up and review of the 2030 Agenda for Sustainable Development and the Sustainable Development Goals (SDGs) at the global level, this year’s edition focused on “Building back better from COVID- 19 while advancing the full implementation of the 2030 Agenda for Sustainable Development”.

Titled “Building back better and promoting sustainable development via Social and Solidarity Economy (SSE)”, the event discussed the role of the SSE in the attainment of the Sustainable Development Goals (SDGs) and the 2030 Agenda in building back better after the Covid-19 pandemic. Moderated by Ms. Judith Hitchman, a member of the International Committee of URGENCI and International Network Joint Coordinator for RIPESS Intercontinental, the panel featured ten internationally renowned experts and policy makers from different international organizations and governments with approximately 70 participants.

In their interventions, the panellists reflected on international milestones achieved at the international level. These include the adoption of the Resolution and conclusions concerning decent work and the SSE at the 110th International Labour Conference (ILC) of the International Labour Organization and the Recommendation on the SSE and social innovation by the OECD Council. They also provided updates on the recent advancements towards a UN General Assembly resolution on the SSE and sustainable development. Some advances at regional, national and local levels were discussed, including the launch of the European Union action plan on social economy; and other initiatives at the national and local levels.

Ms. Chantal Line Carpentier, Chief of the UNCTAD Office in New York and Deputy Chair of the UNTFSSE, recalled that the attainment of the SDGs is offtrack due to the effects of the COVID-19 pandemic, extreme geopolitical tensions and armed conflicts. She noted that the promotion of partnerships and mobilization of plural economy organizations and enterprises, including SSE entities, is key to facilitating transformational change. Ms. Carpentier framed the debate within the work of the UNTFSSE and explained its priorities and ongoing action plan.

Ms. Valentina Verze, Technical Officer on the SSE and decent work at the ILO, presented the Resolution and Conclusions concerning decent work and the SSE that were adopted at the 110th ILC of the ILO. Ms. Verze noted that the conclusions include, for the first time, a tripartite definition of the SSE at the international level. They provide guidelines to the ILO constituents and the Office in advancing the SSE in the service of decent work and a people- and planet- centred future of work.

Ms. Toni Moore, General Secretary of the Barbados Workers’ Union and Spokesperson of the workers’ group during the ILC General Discussion, brought the point of view of the workers’ organizations, highlighting the prominent role of SSE entities in advancing workers’ rights and decent work, especially for workers operating in the informal economy.

Ms. Antonella Noya, Head of the Unit on Social Economy and Innovation at the OECD, noted that the recently adopted OECD Recommendation on SSE and social innovation is based on nine building blocks that provide the conditions for the SSE to thrive and help address challenges that affect the SSE. Ms. Noya added that the Recommendation capitalizes on the guidance provided in OECD/EU Better Entrepreneurship Policy Tool, used to review social economy frameworks in OECD Member countries, EU Member states, and beyond.

Mr. Arnaud Boulanger, Senior Officer of the French Ministry of Economy and Finance presented the Pact for Impact Alliance, which is intended as a platform for the promotion of dialogue and synergies and the advancement of the SSE at international level.

Ms. Maravillas Espín, General Director of Self-Employment, Social Economy and Corporate Social Responsibility at the Ministry of Labour and Social Economy of Spain, spoke about the engagement of the Spanish government in the advancement of SSE at national, regional and international levels. She pointed out the support of Spain towards the tabling of a UN resolution on the SSE and sustainable development. Ms Espín remarked that “the time is now” to create supportive ecosystems for the SSE.

Mr. Dato’ Mohammad Radhi bin Abdul Razak, Deputy Secretary General for Policy and Monitoring Sector at the Ministry of Entrepreneur Development and Cooperatives (MEDAC), presented the national programme to promote social enterprises in Malaysia as a tool to advance human rights and respect for the nature.

Mr. Denison Jayasooria, former chair of the Asian Solidarity Economy Council (ASEC) and member of RIPESS, highlighted good practices of SSE entities in leaving no one behind in the Asian region and stressed the need to document and raise awareness about these good practices.

Ms. Fulvia Farinelli, Senior Economist in the Resident Coordinator Office of the United Nations in Argentina, discussed the regenerative role that the SSE can play in the creation of decent work and the advancement of just transition at territorial level. Ms. Farinelli added the importance of adopting a “one-UN approach” in promoting SSE at regional and national level.
Mr. André Lazzi, representative of the Habitat International Coalition and Civil Society and Indigenous Peoples’ Mechanism, spoke about some experiences of pursuit of food sovereignty and human rights carried out by SSE entities in Brazil, in a coordinated and self-managed way with indigenous and local communities.

The recording of the session can be accessed in the YouTube channel of RIPESS Intercontinental and it is available in 3 different languages (English, French and Spanish).