UNTFSSE participation in the conference “Social economy, the future of Europe” 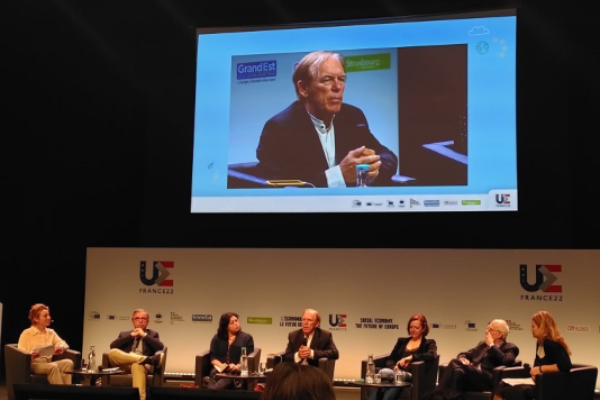 The Director of the Enterprises Department at the ILO and Chair of the UN Task Force on the Social and Solidarity Economy (UNTFSSE), Mr. Vic Van Vuuren and one official from the COOP Unit at the ILO and Technical Secretariat of the UNTFSSE, Ms. Valentina Verze, participated in the conference.

The conference was organized by the city and euro-metropolis of Strasbourg, in partnership with the French Presidency of the Council, the European Commission (EC), the European Economic and Social Committee (EESC) and the Committee of the regions and in cooperation with EU and French social economy networks, such as Social Economy Europe, ESS France, REVES, SSE International Forum, etc.

The event took place at the Palais de la Musique et des Congrès in Strasbourg on 5-6 May 2022 and it counted on a rich program, including several workshops, thematic areas for debate and participation, and ethical tours.

At the presence of several distinguished speakers, including the EC commissioner on jobs and Social Rights, Mr. Nicholas Schmit, it was the opportunity to exchange, build alliances, exchange and engage in the implementation of the European Social Economy Action Plan  (SEAP) launched in December 2021. 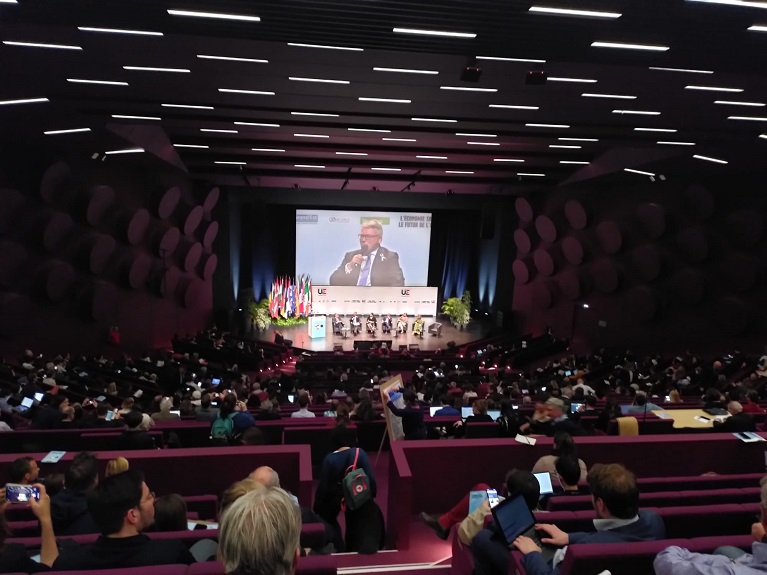 In this framework, the session on “Building a Strong Global Movement for International Recognition of the Social Economy” was organized by the SSE International Forum (SSEIF) and the European Economic and Social Committee (EESC) on Friday May 6 at 11.00 am.

The session, moderated by Ms. Eva Cantele, General Delegate at SSEIF and Ms. Marta Bruschi, Expert Advisor, Networks and Community Engagement at DIESIS, tackled the topic of how the Social and Solidarity Economy (SSE) can change scale and be progressively identified and recognized as one of the solutions to the challenges and issues of global development.

The panel counted on the presence of Ms. Maravillas ESPIN, Director of Self-employment, ES and CSR – Ministry of Labour Spain, Mr. Pierre HURMIC, Mayor of Bordeaux, President of the GSEF, Mr. Vic VAN VUUREN, Director of Enterprises at the ILO and Chair at the UNTFSSE, Ms. Marina MONACO, Senior Advisor in charge of social economy at the European Trade Union Confederation (ETUC) and Bruno ROELANTS, General Manager at the International Cooperative Alliance (ICA).In his intervention, Mr. Van Vuuren noted that the year 2022 represents a momentum for the recognition of SSE. Mr. Van Vuuren mentioned that at national level, many governments are recognising – through laws and strategies – the role of SSE as tool to create decent employment, favour just transition, promote social innovation. At regional level, bodies such the European Commission and the African Union are working on action plan on social economy and a strategy on SSE – which represent historic milestones. At international level the 2022 represents a turning point. The International Labour Conference of the ILO will hold a General Discussion on SSE and Decent work. It represents a unique opportunity, to explore how the SSE is contributing to advance the Decent Work Agenda and a human-centred future of work. It calls for a debate around the definition, components, principles, limits, added values of such economic models and implications in terms of quality of jobs. “On this basis, the ILC general discussion will be an opportunity in May and June this year for governments, trade unions and employer organizations from the 187 constituents of the ILO, to assess and recognize the contribution of the SSE to the creation of the decent jobs” he added.

Mr. Van Vuuren continued by mentioning an OECD recommendation and related guiding principles on social economy and social innovation is likely to be adopted in the coming months. In addition, some governments, are leading the process around a resolution on SSE to be tabled at the General Assembly. Many European governments are playing a leading role in this, including the French government, the Spanish government and a few others. A group of leading countries will be crucial for leading such a process, which will represent an essential achievement at international level, since there is no UN resolution recognizing the SSE and its role in achieving Sustainable Development Goals (SDGs) – he concluded.