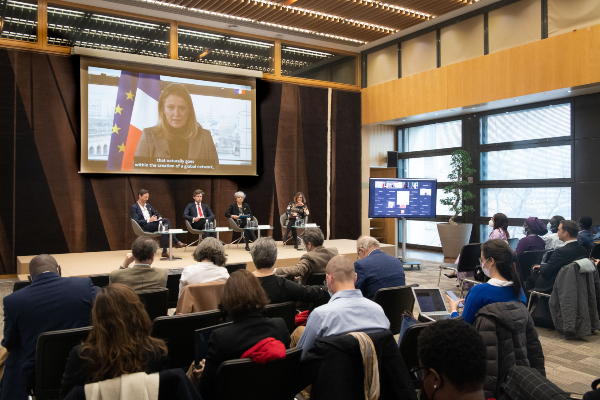 The Chair of the UNTFSSE and the ILO’s Enterprises Department Director, Mr Vic van Vuuren, spoke at the Pact for Impact event “For an International Recognition of the Social and Solidarity Economy (SSE)” on 4th March 2022.

Pact for Impact Alliance is an initiative led by the French Government aiming to create a Global Alliance that promotes and strengthens the SSE and the Inclusive Economy. The event was held to review the history and achievements of Pact for Impact and to present its roadmap for 2022. It followed previous international events, notably the first international Pact for Impact summit in July 2019, the UNGA side event in September 2019 and the re-launch event in April 2020.

Setting the scene: Calling for a Global Alliance

The event started with the opening remarks of Ms Olivia Grégoire, French Secretary of State for Social, Solidarity and Responsible Economy. She noted that it was important to bring together the public authorities and the SSE networks to co-develop the SSE model at local, national and international levels, which is the purpose of the Alliance. Ms Grégoire then elaborated upon the three working groups dedicated to the status and the governance of the Alliance and discuss good practices around different topics. She pointed out that the political environment is now in favour of the SSE with momentum building at the regional and international levels. She noted that the EU has listed the SSE as one of the 14 key industrial ecosystems to ensure the resilience of the economy and has published an action plan for the social economy last year. She also mentioned that on 17 Feb 2022, France had organised a council composed of European ministers in charge of social economy to discuss the implementation of the action plan. She noted that participating member states showed strong willingness to act at national level and to adopt a recommendation in the framework of the development of a strong social economy in Europe at the EU Council in 2023. At the international level, Ms Olivia Grégoire pointed to the upcoming general discussion on decent work and the SSE at the 110th session of the International Labour Conference (ILC) and the efforts towards a UN resolution on the SSE. She concluded by noting that he Pact for Impact propose to help and assist in those efforts. 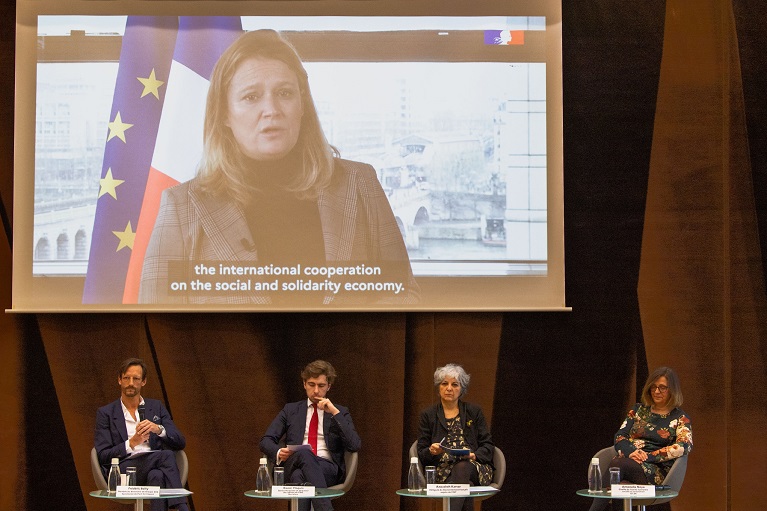 Perspectives for 2022 and beyond

As a guest speaker in the roundtable on “Perspectives for 2022 and beyond”, Mr Van Vuuren made a presentation on “Towards a UN resolution on the SSE”. Mr Van Vuuren started his intervention by introducing one of the three main priority objectives of the UNTFSSE, Mainstreaming and enhancing the SSE’s international dimension and profile. He pointed out that at the global level, there is one missing piece of the SSE puzzle, that is a UN resolution on the SSE which will strengthen the global platform of the SSE and facilitate its mainstreaming into regional and national strategies. He mentioned that some member states are leading the process around the UN resolution and the UNTFSSE welcomes this effort and will provide technical backstop to it. He noted that the manifesto of the Pact of Impact Alliance calls for such important step to be undertaken. He further expressed that once such a UN resolution on SSE is achieved, it would be a turning point for the recognition and development of the SSE. He said that the upcoming discussion at the ILC of the ILO is also of great significant in this sense.

The session continued with the intervention from Ms Anousheh Karvar, Government Delegate to the ILO, who introduced the general discussion on decent work and the SSE at the 110th International Labour Conference of the ILO and Ms Antonella Noya, Chief of the Social Economy and Innovation Unit of OECD, who focused on international cooperation in the SSE. In the end, the moderator of the session, Mr Frédéric Bailly from the Secretariat of Pact for Impact, presented the Coalition Manifesto of Pact for Impact.

The recognition of the SSE, what challenges for the active states?

The session was followed by a roundtable on “The recognition of the SSE, what challenges for the active states?” moderated by Mr François Gave, Special Representative for Corporate Social Responsibility and the Social Dimension of Globalization, Ministry of Europe and Foreign Affairs, France.

Ms Zahra Iyane Thiam Diop, Minister of Microfinance and SSE in Senegal, stated that the government adopted an SSE framework law in 2021 aiming at recognizing and structuring the SSE sector in the country. Minister Diop mentioned that the government is now working on its application, since a policy framework will be key to advance on priority pillars, such as access to finance, provision of technical support, gathering of data and statistics, etc.

Ms Logboh Myss Belmonde Dogo, Minister of solidarity and of the fight against poverty in Côte d’Ivoire, stated that the country still does not have a legal and institutional framework on SSE, while the government is starting to work on it. The importance of advancing SSE is particularly linked to its role of advancing solidarity, fighting poverty and enhancing inequality, Minister Belmonde Dogo added.

Mr Andrea Orlando, the Italian Minister of Labour, mentioned that this year Italy is chairing the Monitoring Committee of the Luxemburg Declaration, with 20 European countries. Minister Orlando noted that: “there is an urgent need for social justice as a foundation for peace and prosperity, which is why it is increasingly important to promote the social economy across borders and to recognize its role in international cohesion and development. The social economy is therefore also a way to peace because it is a powerful instrument of social justice”. The Italian presidency of the Monitoring Committee of the Luxemburg Declaration offers an important opportunity to support the process around a UN resolution dedicated to the SSE, he concluded.

Mr Achille Bassilekin III, Minister of Small and Medium Enterprises, Social Economy and Handicraft, Cameroon, mentioned the important developments of the social economy in Cameroon. Minister Bassilekin III emphasized that the structuration and decentralization of the SSE ecosystems is one of the priorities in the country and it is crucial to recognize the role that the SSE units and their umbrella organizations can play in the co-construction and implementation of the national programmes.

Ms Maravillas Espín, Director General for Social Economy and Corporate Social Responsibility in Spain; Mr Alexandre Roig, President of the National Institute of Associativism and Social Economy in Argentina; Mr Marvin Rodríguez Cordero, Vice President of Costa Rica; Mr Juan Manuel Martinez Louvier, General Director of the National Institute of Social Economy in Mexico sent video messages to the event. They noted the importance of join forces to advance the SSE as vehicle for a sustainable and inclusive development at local, national, regional and international level, while the Spanish and Costa Rican governments mentioned their engagement in supporting the process around the adoption of a UN resolution on SSE.

International SSE networks, what mobilization for a stronger recognition of the SSE?

At the time of the closure of the event, 37 organizations signed the Manifesto, including six governments, including the governments of Argentina, Cameroon, Ivory Coast, Ecuador, France, Luxembourg. The organizers invited to keep signing the manifesto.

The video of the event is available here.