UNTFSSE Participates in an International Seminar on Social Innovation and Inclusion 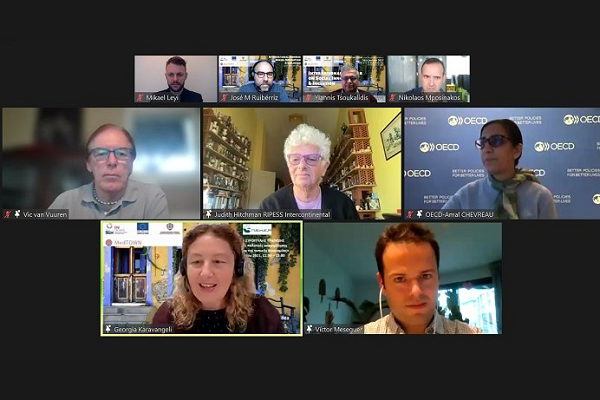 The Chair of UNTFSSE and Director of ILO Enterprises Department joins a discussion at the MedTOWN’s international seminar on social and solidarity economy.

On 26 January 2022, Mr Vic van Vuuren, the Chair of UNTFSSE and Director of ILO Enterprises Department attended the MedTOWN International Seminar on Social and Solidarity Economy which was held virtually.

In a panel discussion on social innovation and public policies, Mr van Vuuren shared ILO’s experience in innovative Social and Solidarity Economy (SSE) practices and highlighted the importance of global partnerships based on sustainable development and solidarity.

During his intervention, Mr van Vuuren first talked about the main challenges of implementing a multi-stakeholder approach to co-designing public policies. He said that participation of SSE stakeholders was crucial for the co-creation of SSE policies, and other policies relevant to the SSE. Lack of comparable statistics, across countries and regions, on SSE units and their impact on employment and the economy at large, prevented them from being used as a unit of analysis to inform policy and practice. In addition, the highly localized nature of SSE units with a strong focus on their members’, users’ and communities’ needs might impede their participation in policy discussions at the national and international levels. The limited institutional infrastructure on SSE education and training is also among the challenges to create a better understanding around the SSE, he added.

Mr Van Vuuren advised that governments could consult with and promote active participation of the SSE umbrella organizations- the most representative employers’ and workers’ organizations. Such co-construction policy process could help ensure the policies well suited to the development of the SSE in the locality and create a greater sense of ownership among the key SSE stakeholders. He noted that the SSE legislation that explicitly recognizes SSE values and principles was a backbone of such process.

He further elaborated on why SSE’s impacts had the potential to be scaled up through South-South and Triangle Cooperation (SSTC). He pointed that both SSTC and SSE shared the fundamental principle of solidarity. This enables the sharing of knowledge, experiences and good practices in support of capacity building, technology transfer and resource mobilization. In addition, the “innovation” component also brought the two closer. He noted that in the process of building a broad global partnership for SDGs implementation, SSTC can play a crucial role in strengthening the role of the SSE as a tool for local economic development.

Upon answering a question about the possibility of creating “sandbox” or testing environments for specific legislation on social innovation, Mr van Vuuren noted that the concept of “sandbox” was great as policies were always needed to be customized to local circumstances. However, the sustainability of such a “sandbox” depended greatly on the regulatory framework and the economic planning of the locality. He added sharing and exchange of good practices is always a good way to ignite innovation.