The UNTFSSE participated in the opening session of GSEF2021 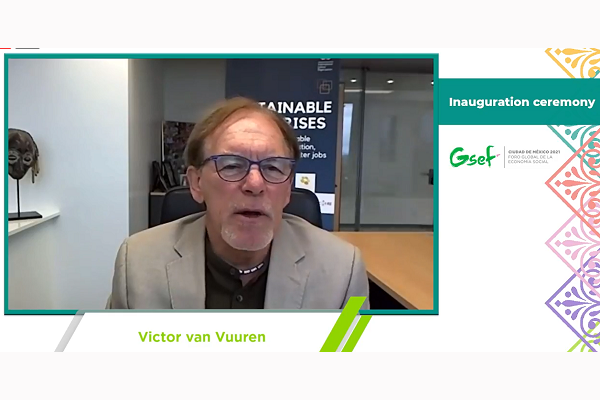 The fifth Edition of the Global Social Economy Forum (GSEF) was held in Mexico City from October 4 to 8, 2021. Focusing on “Local Governments and Social Economy: co-creation of paths for a green and inclusive economy”, GSEF2021 engaged representatives from national and local governments, private, civil society and international organizations, academia, researchers and experts, in dialogue and action for the development of the Social and Solidarity Economy (SSE).

On the first day of the forum, the Director of Enterprises Department of the ILO and the chair of the UN Inter-Agency Task Force on Social and Solidarity Economy (UNTFSSE ) Mr Vic van Vuuren addressed at the opening ceremony of this important global forum on SSE.

He noted that the existing problems – growing inequality, lack of decent jobs, climate change issues – existed even before the pandemic. They now require concerted action by all countries through inclusive and sustainable public policies. The promotion of a new paradigm of production and consumption that assigns a prominent role SSE units becomes not only necessary but also urgent. Global alliances such as GSEF are playing a crucial role in raising awareness, informing and encouraging the attention of policy makers, and strengthening the awareness of SSE actors about the potential of what is being done at the grassroots level. Mr van Vuuren congratulated GSEF and the Local Organizing Committee for organizing this global forum and wished them success.

The video of the session is available here.

The full program of the event is available here.