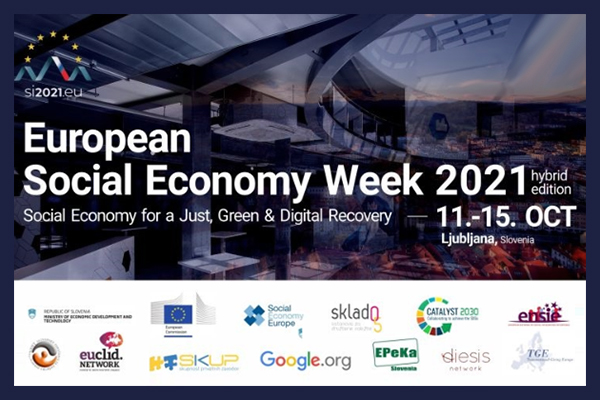 Director of ILO Enterprises Department and Chair of UNTFSSE, Mr Vic Van Vuuren participated at the European Social Economy Week 2021 in a discussion on the global challenges and perspectives of social economy as a driver of sustainable development.

The Director of ILO Enterprises Department and Chair of the UN Inter-Agency Task Force on Social and Solidarity Economy (UNTFSSE), Mr Vic Van Vuuren participated in the high-level conference and spoke at the session dedicated to “Social economy as a driver of sustainable development at global level: Ecosystems, Challenges, Perspectives”. 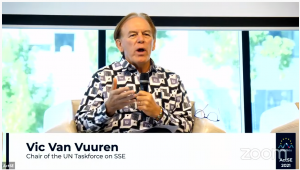 During his intervention, Mr Van Vuuren shared the world of work statistics from the ILO. The ILO estimated that 8.8 per cent of total working hours were lost in 2020, equivalent to 255 million full-time jobs. With the severe challenges facing the world today, economic units strongly grounded in values of sustainable development are needed, he added. The 2030 Agenda had already provided the framework for us to work together and the social and solidarity economy (SSE) can play an important part in this regard.

He further elaborated upon the ways SSE could position itself in contributing to achieving the 2030 Agenda and how to take it forward. He stressed that one big challenge was the lack of common understanding of SSE at the global level. That is why the UNTFSSE is supporting some Member States in bringing a resolution on the SSE to the UN Assembly. He explained different roles of the actors in promoting the SSE. Governments are the key to provide enabling environment for the SSE to thrive. However, unfortunately there is a big gap between developing and developed economies, he noted. How to fill the gap is also one challenge that will need to be overcome, he underlined.

Non-governmental organizations have great creativity and innovation strength, he observed and proceeded to introduce the UNTFSSE’s programme “SSE for SDGs” that helps countries to identify and intensify the potential of the SSE in contributing to the SDGs and the programme of “Knowledge Hub”. He gave the example of the ILO Academy on SSE “Building back better: the role of the Social and Solidarity Economy in a people-centred and planet-sensitive recovery”, which will take place from 15-26 November which will allow for an exchange of experiences and methodologies on SSE at the global level. Mr Van Vuuren concluded his remarks by emphasizing the importance of education, branding, and mainstreaming debates at the global level in promoting the SSE. “One of the big things that is missing is an education system that tells about Social and Solidarity Economy”, said Mr Vic Van Vuuren. 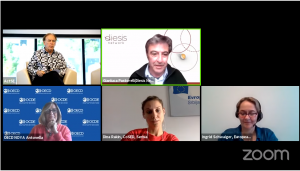 The session included insights of representatives from the OECD, European Commission and Euclid Network in addition to country experiences from Tunisia and Serbia. The session was presented and moderated by Gianluca Pastorelli, President of Diesis Network. Other speakers included Antonella Noya, Head of Unit for Social Economy at the OECD; Ingrid Schwaiger, Deputy Head of Unit at DG NEAR; Imen Ouardani, Deputy Mayor of Sousse, Tunisia; Rodérick Égal, President of IESMED on Developing the Social Economy in Tunisia; Dina Rakin, Director of the Coalition of Solidarity Economy Development(Serbia) and Suzanne Wisse-Huiskes, CEO of Euclid Network.

The recording of the session can be viewed here.