The UNTFSSE and RIPESS co-organized a session in GSEF2021 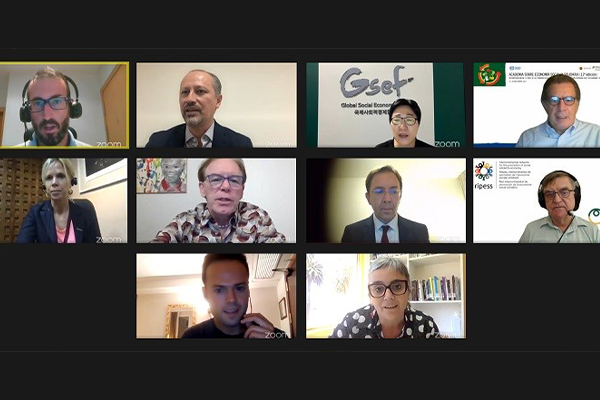 The fifth Edition of the Global Social Economy Forum (GSEF) was held in Mexico City from October 4 to 8, 2021. Focusing on “Local Governments and Social Economy: co-creation of paths for a green and inclusive economy”, GSEF2021 engaged representatives from national and local governments, private, civil society and international organizations, academia, researchers and experts, in dialogue and action for the development of the Social and Solidarity Economy (SSE).

On the third day of the forum, the session on “Develop territorial and international alliances to promote the Social and Solidarity Economy (SSE) as a people-centred and planet-sensitive economy” took place. It was co-organized by the UNTFSSE and the Intercontinental network for the promotion of social solidarity economy (RIPESS) and reflected on different key aspects characterizing SSE as key actor in the pursuit of Agenda 2030 and a better recovery. The panel discussion focused on the importance of alliances and partnerships at different levels – local, national, regional and international- to strengthen SSE ecosystems and promote SSE’s role in the achievement of the SDGs, in order to promote a people-centred and planet-sensitive economy.

The session, moderated by Mr. Juli Hernandez, project manager and advocacy officer at RIPESS, started with the opening remarks from Mr. Vic Van Vuuren, Chair of the UNTFSSE and Director of the Enterprises Department at ILO and Ms. Laurence KWARK, Secretary General of GSEF.

The roundtable, moderated by Mr. Roberto Di Meglio, a senior specialist at the ILO, focused on the potential of SSE to achieve the SDGs and importance of alliances and partnerships at different levels:

The roundtable was followed by the closing remarks of Mr. Yvon Poirier, RIPESS and Representative of RIPESS LAC, who spoke about the regionalization process of the UNTFSSE.

The session concluded with Q&A session.

The video of the session is available here.

The full program of the event is available here.