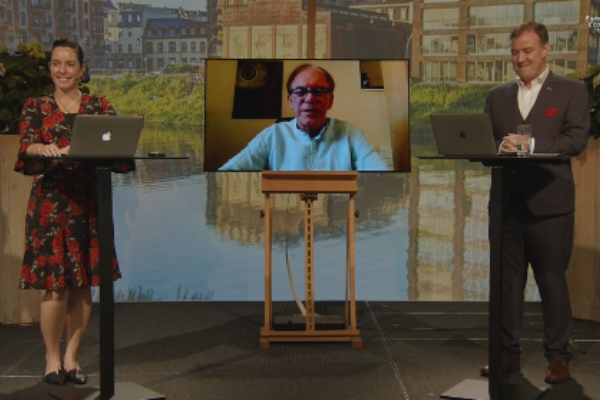 The Chair of the UNTFSSE and Director of ILO Enterprises Department, Mr. Vic van Vuuren, participated and spoke on the first day ofthe European Social Economy Summit (EUSES) broadcasted from Mannheim on 26-27 May 2020.

The European social economy journey came to its climax with the successful convene of the European Social Economy Summit on 26-27 May 2021 following a eight month process of the “Digital Road to Mannheim” that lasted from September 2020 to April 2021. The Summit was organized by the City of Mannheim in partnership with the European Commission and with the support of Germany’s Federal Ministry for Family Affairs, Senior Citizens, Women and Youth. The aim of the Summit was to strengthen the social economy in Europe and harness its contribution to economic development, social inclusion as well as green and digital transitions. The event brought together more than 3,000 participants representing the rich diversity of actors active in the field of social economy in Europe.

Mr. Peter Kurz, Mayor of Mannheim City and Mr. Thierry Breton, European Commissioner for Internal Market opened the Summit, followed by three statements from Ms. Hilde Schwab, Chairperson of the Schwab Foundation for Social Entrepreneurship, Ms. Christa Schweng, President of European Economic and Social Committee, and Mr. Angel Gurría, Secretary-General of OECD. The European Commissioner for Jobs and Social Rights Mr. Nicolas Schmit delivered a keynote speech, providing an overview on social economy priorities in the EU. All the keynotes and speeches can be viewed here.

Mr. Vic van Vuuren, Director of ILO Enterprises Department and the Chair of the UN Inter-Agency Task Force on Social and Solidarity Economy (UNTFSSE) joined the discussion with the two masters of ceremonies to introduce the role of UNTFSSE and its areas of focus in supporting social and solidarity economy (SSE). He first pointed out that the increasing social deficit and levels of hardship and human suffering is not acceptable. SSE can play a significant role in addressing this although it has not yet reached its full potential. The role of UNTFSSE is to unlock that potential by creating a global platform that supports SSE’s contribution to the Sustainable Development Goals (SDGs). It also focuses on bringing good practices down to grassroots and helping developing countries in order to avoid a “social and solidarity economy divide”. He further introduced the Knowledge Hub programme at the UNTFSSE where it hosts and constantly seeks research-based outputs on SSE as a means of implementation of the SDGs. Mr. van Vuuren also noted EU’s leading actions on promoting social economy through policymaking, awareness raising activities and concerted efforts. He emphasized that it is the UNTFSSE’s mandate to serve as a bridge in transporting such expertise and practices to developing countries. In response to the question on “what should the European Commission keep in mind when developing its Social Economy Action Plan?” Mr. van Vuuren noted that education and local economic development are critical. Education is instrumental in mainstreaming SSE and scaling up the impact of SSE, he noted. Local economic development needs to focus on enterprises of opportunity rather than enterprises of necessity and to guarantee SSE workers meaningful and decent jobs, he added. Mr. van Vuuren concluded with a mention of the International Labour Organization (ILO)’s historic decision to hold a general discussion on SSE at its annual International Labour Conference (ILC) in June 2022. He said that it is a great opportunity to highlight the importance of SSE and its contribution in achieving SDGs at an international arena.

The two-day summit discussed how social economy could help reshape the economy post-COVID-19 by promoting inclusive sustainable economic models for the green and digital transition within Europe. The discussions focused on three dimensions: digitalization of the Social Economy, (social) innovation, cross-country and cross-sectoral collaboration. The major outcome of the Summit is the Mannheim Declaration on Social Economy, which identified the needs to be done to strengthen the Social Economy in Europe. It will feed into the preparations of the European Action Plan for the Social Economy.