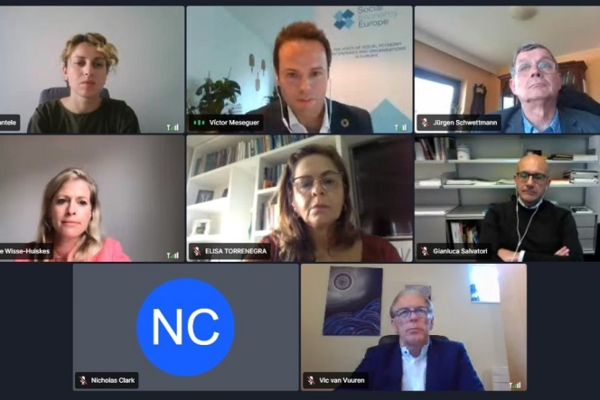 The event “Social and Solidarity Economy: leading the implementation of the 2030 Agenda and the contribution to a fair recovery” was virtually held on April 29 2021.

The webinar took place in the framework of EUSES on the day dedicated to Partnerships for maximising social impact.

Moderated by Mr. Victor Meseguer, Director of SEE, the event started with opening remarks by Mr. Vic Van Vuuren, Chair of the UNTFSSE and Director of the Enterprises Department at ILO and Patrizia Bussi, Vice-President of SEE and SG of ENSIE.

Mr. Van Vuuren highlighted the transformative role that the Social and Solidarity Economy (SSE) plays in advancing the sustainable development goals (SDGs) and in advancing access to certain rights, to better jobs and living conditions for people, including those most excluded. He added that partnerships among different actors is the key at all levels. At the local level, the idea of the “new welfare” is rooted in multi-stakeholder and multi-level partnerships. At the national level, SSE policies and programs need to be mainstreamed within the national development plans and policies. At the international level, he noted, the fora and the alliances put in place by governments, developmental agencies, and actors involved in the SSE movements are contributing to advance the debate on how to shape agendas that tackle the challenges facing humanity today.

Ms. Bussi examined the importance of partnerships and mobilizing SSE movements in several countries for the achievements of SDGs. She mentioned that this is a crucial year for social economy in Europe and beyond, since a European Action Plan for the Social Economy will be presented in the second part of the year. Many organizations contributed to it, by sharing their policy recommendations, including SEE with its recent policy paper, UNTFSSE’s members and observers, SEE’s members and other organizations and governments as well.

The session continued with a panel discussion, moderated by Mr. Jürgen Schwetttmann, international consultant and ex-official at ILO, who started the session by sharing some reflections on the key aspects characterizing SSE in achieving the UN 2030 Agenda and transitioning to a better recovery. Mr. Schwetttmann mentioned the importance of focusing on the SDG targets, which are more concrete, operational and measurable than the more aspirational goals. Of particular relevance to the SSE are the access-oriented SDG targets, he noted. SSE organizations (SSEOs) have demonstrated their effectiveness in responding to crisis situations through self-help mechanisms and the principles of solidarity, mutuality and reciprocity.

The first speaker of the panel, Ms. Suzanne Wisse-Huiskes, CEO of Euclid Network, spoke about SSE and its role in achieving a green and just transition (SDG 12, SDG 13). Ms. Wisse-Huiskes noted that social enterprises working in the circular economy create both social and green innovation. Because the innovation is driven by existing and concrete needs of their communities, it is transformative and impactful. She added that SSEOs can be divided into those with more focussed contributions, whose contributions are concentrated in a particular area of their value chains. In this case, their contributions are more narrowly focussed on one or a small number of SDGs. There are also broad contributors whose impact on the SDGs stem mostly from a particular aspect of their value chains but who are contributing to many different SDGs simultaneously. “In waste reduction, for instance, we see that social enterprises contribute to 12.5 even though it is not their primary goal” she noted. SSEOs have the power to change entire industries, as their activities inspire widespread change in three ways. Firstly, they are setting an example toward other mainstream enterprises, providing new business models; secondly they are creating a sought after product or service for consumers, corporations and government; and thirdly, they are setting a new standard of doing business, raising the bar in providing solutions for the climate crisis. She shared some concrete examples, including Live Love Recycle in Lebanon and Paper on the Rocks in the Netherlands. She concluded by emphasizing the need for dissemination of good practices.

The panel continued with the contribution of Ms. Eva Cantèle, General Delegate of SSE International Forum who focused her intervention on the fight against poverty and promotion of peace, justice and strong institutions (SDG 1, SDG 16). Ms. Cantele mentioned that SSEOs are a driving force behind the dissemination of decent work, by creating a positive impact on job creation and incomes, right to work, social protection and social dialogue. She noted that they pay particular attention to vulnerable groups (e.g. women, people living with AIDS, migrant workers, people with disabilities, refugees among others) who face barriers in accessing the labour market by developing services to address the needs of poor and vulnerable groups; by supporting territorial revitalization and local development. In terms of promoting peaceful and inclusive societies, she suggested that SSEOs are characterized by social values and democratic management; have a requirement of transparency, and sometimes, the members have control over the different governance bodies; participate in social dialogue. To illustrate her points, she presented the case of Kafo Jiginew in Mali and Vega Real in the Dominican Republic. Ms. Cantele’s presentation is available here.

The panel also benefitted from the inputs shared by Ms. Béatrice Alain, Executive Director of Chantier de l’économie sociale, Co-chair of TIESS and Director of CIRIEC-Canada, who tackled the issue of partnership and multi-stakeholder approach, with a focus on women inclusion (SDG 17, SDG 5). Ms. Alain mentioned that women constitute more than 50 per cent of boards in the SSE in Quebec. This is far above the presence in private and public enterprises’ boards. SSE also offers accessible and quality services often provided by women. The extension of affordable day-care in Quebec through SSE has allowed women’s presence in the workforce to skyrocket and reduced the poverty rate of single-parent households by one third. In terms of partnerships, she added that SSE has been doing well before the crisis and during the crisis. In fact, in emergency situations, where we need to innovate, react quickly in response to local realities (not a one size fits all approach) and meet basic needs: the SSE has always done that. In periods of austerity the SSE achieves social and economic goals. In Quebec, this means targeting a number of social issues that existed before the crisis but have been further aggravated by it, showing what the SSE does and how it plays a distinct role from the public and private sector, and identifying what is needed for it to increase that role. She concluded by saying that it is crucial for the SSE movement to demand a seat at the table to identify and extend effective solutions to the societal crisis, she concluded.

Following the panel discussion, the event came to a conclusion with the closing remarks of Ms. Elisa Torrenegra, Co-Chair of SSE International Forum and AIM Board member and Mr. Gianluca Salvatori, CEO of EURICSE. Ms. Torrenegra focused on the role of the SSEOs and, in particular mutuals, in universalising access to health and contributing to the sustainable development and recovery of the Latin American region after this pandemic. She noted that each country organises its health and social protection systems at its own discretion. In those states where governments are not fully committed to Universal Coverage, SSEOs guarantee these services to their members. She added that in Colombia “we not only managed to be included as operators in the Social Security Health System, but we were treated on equal terms, which also meant equality of demands and today the result is that 6 companies of solidarity origin are among the largest in the country. We represent more than 12 million people equivalent to more than 50 per cent of the most vulnerable and always placed in the top 10 in the official rankings rated by users, being the subject of awards and recognition in risk management”. She noted that it is important to have good leaders in order to advocate for the movement and stay close to the reality and the needs of the communities, while creating alliances. Ms. Torrenegra’s presentation is available here.

Pointing out the “double level” impact of SSE, both economic and social, Mr. Salvatori highlighted some recommendations that show how SSE can respond in critical, frail situations, mobilizing resources and energy that would have otherwise been scattered or fragmented. Mr. Salvatori noted that it is crucial: to invest in training and education; to advocate for a stronger role for SSE in the innovation processes and policies; to accelerate the transition from a welfare system centred primarily on the public sector to a system centred on society as a whole. He noted in such a welfare society, the production of health and social services (in a broad sense) is distributed among a plurality of different actors, among which a crucial role is played by the SSEOs. He underlined the need to develop a greater capacity for self-representation of the SSE community, in order to make its contribution and role more relevant in the dialogue with other institutions and organizations, increasing the influence in the design of public policies; and to build a strong engagement of the SSE community for the regeneration of social capital.

You can find the detail program here.

You can find the recording of the event here.