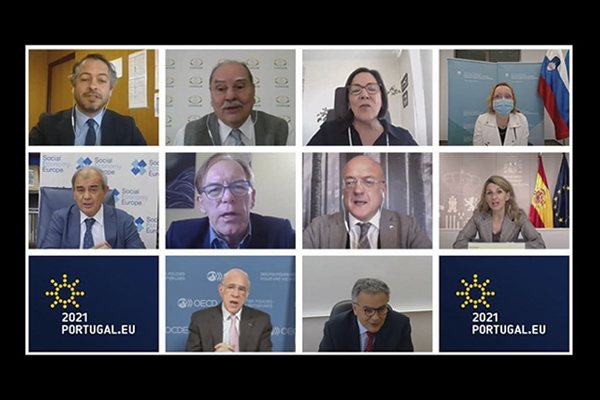 The UNTFSSE Chair participated in the event titled “The role of Social Economy in the creation of jobs and in the implementation of the European Pillar of Social Rights” organized by the Portuguese Government on March 29, 2021.

The high-level event was held partially in presence at Queluz Palace in the city of Sintra, and partially via videoconference. The opening remarks of Mr. Basílio Horta, Mayor of Sintra, Ms. Ana Mendes Godinho, Minister of Labour, Solidarity and Social Security of Portugal and the representatives of the Network of Portuguese Cities set the scene. Mr. António Coelho led the day’s proceedings.

Minister Godinho mentioned that Portugal takes on not only the six-month presidency of the Council of the European Union (EU) but also the presidency of the Monitoring Committee of the Luxembourg Declaration. In this framework, Portugal nominated the European Capital of Social Economy for 2021, a status that, for the first time, is shared by five cities. Braga, Cascais, Coimbra, Sintra and Torres Vedras signed a Chart of Commitment,  as nominated by the António Sérgio Cooperative for the Social Economy (CASES).

Ms. Godinho congratulated this innovative initiative, which “shows the centrality of local territories in finding concrete solutions to the daily problems of the populations, and the social economy as a sector that greatly contribute to inclusive and sustainable development.” The Minister recalled that social economy constitutes one of the key instruments for the implementation of the action plan of the European Pillar of Social Rights, which will be discussed at the Porto Social Summit, on 7 and 8 May, under the Portuguese presidency of the EU Council.

Minister Godinho concluded by mentioning that during the pandemic the social economy is proving itself to be a motor for job creation and preservation at a time of crisis. She also added that the Portuguese Government put in place the “Mareess” programme – Support Measures for Emergency Reinforcement of Social and Health Equipment, and will soon launch the “Valorizar Social” programme, aiming at raising the capacity of those who work in the social economy.

The event continued with the intervention of the European Commissioner for Jobs and Social Rights, Mr. Nicolas Schmit.

The morning was concluded by the presentation of the main policy options put forward by the Study on the impact of the Commission’s Social Business Initiative introduced by Ms. Manuela Geleng, an official of  the European Commission (DG EMPLOYMENT) who is responsible for the coordination of the EU Action Plan for the Social Economy. Her presentation was followed by remarks by the Director of Social Economy Europe, Víctor Meseguer, who shared the recommendation of the policy paper Co-designing the Action Plan for the Social Economy: for an economy that works for people and the planet.

The conference resumed in the afternoon with the keynote speech delivered by the Rapporteur of the European Economic and Social Committee’s opinion on “The role of Social Economy in the creation of jobs and in the implementation of the European Pillar of Social Rights”, Mr. Giuseppe Guerini who is also the president of CECOP.

This was followed by a round table on “The role of Social Economy in the creation of jobs and in the implementation of the European Pillar of Social Rights” moderated by the Director of FEUC and expert on Social Economy, Mr. Álvaro Garrido. Speakers who contributed to the roundtable include: the General-Secretary of OECD,  Angel Gurría; the Director of the Bureau for Workers’ Activities (ACTRAV) at ILO, Ms. Maria Helena André; the State Secretary of Labour, Family, Social Affairs and Equal Opportunities of Slovenia, Ms. Mateja Ribič; Minister of Labour and Social Economy of Spain, Ms. Yolanda Díaz; The Chairman of United Nations Task Force on Social and Solidarity Economy and Director of the ILO’s Enterprises Department, Mr. Vic Van Vuuren; the President of Social Economy Europe, Mr. Juan Antonio Pedreño; the Director-General of Portuguese Confederation of Social Economy, Mr. Francisco Silva; the President of Portugal Social Innovation, Mr. Filipe Almeida.

Mr. Van Vuuren mentioned that the SSE organizations keep facing important challenges today, especially in developing economies, where there is still a gap in terms of enabling environment and policy framework in favour of SSE ecosystems. He noted that, at the same time, SSE organizations are part of the solution, especially in addressing the needs linked to the huge social and environmental deficit.

He added that during such a time of pandemic, it is important to recall that in certain regions, such as Africa, the interest and attention around the concept of SSE started in the early 2000s as a response to the global crisis. SSE was seen as a concrete alternative to respond to the multifaceted crisis, which was also affecting African countries and their people at that time. This crises response aspect of SSE is still and perhaps even more relevant today.

SSE policies and programs should be mainstreamed within the national development plans and policies. For this reason, SSE organizations  should be included in the agendas of modernisation and competitiveness and also environmental policies and programmes promoting transitions that are green, inclusive and fair.

He noted that, in terms of EU’s environmental agenda,  social enterprises and the broader SSE should be further recognized as actors that can contribute to sustainable development, a just transition to a climate-neutral society, and environmentally-friendly food systems. He added, that SSE can also pave the way for equal opportunities and access to the labour market, fair and safe working conditions, social protection and inclusion.

He underlined that “partnership among different actors is key. The “new welfare”, which you are building at EU level, is very much rooted into multi-stakeholder and multi-level partnerships. This is at the core of the Agenda 2030 (SDG 17) and it is rooted in the conviction that a dialogue with SSE sector should reinforce, and not undermine, the role of public sector, which should remain the main sector to ensure access to fundamental rights, like t access to health and welfare for all”.

Both Ms. André and Mr. Van Vuuren announced that the 341st Governing Body (GB) of the International Labour Organization decided to place on the agenda of the 110th Session (2022) of the International Labour Conference (ILC) an item related to “Social and Solidarity Economy (SSE) for a human-centred future of work” for general discussion. This will advance the international debate on SSE and the recognition of the role of SSE in promoting decent work.

In his closing remarks of Mr. Gabriel Bastos, Secretary of State on Social Security in Portugal emphasized the resilient nature of the SSE in crisis and during times of instability. He noted that social economy is very much linked to the objectives of the European Pillar of Social Rights. In this regard, the social economy will contribute to Social Europe. He added that the social economy is a tool for inclusion of vulnerable people and a major creator of decent work. It has a transformative role towards an inclusive and fair Europe, he added. He ended his words by pointing out that the Portuguese Government strongly supports the EU Action Plan on social economy.

The event was concluded by a cultural moment and the concert of the String Quartet of Sintra.

The event’s program is available here.

The recording of the event is available here in English, Portuguese, French, Spanish, Italian and German.