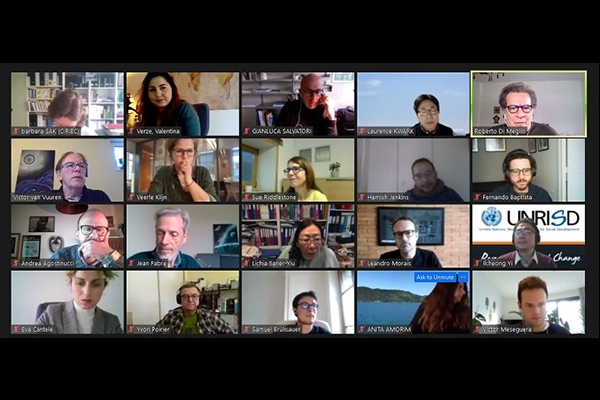 The meeting started with the discussion around several priority objectives in the work plan of the UNTFSSE , including the process leading to a UN resolution on SSE in 2021 and two joint UNTFSSE project proposals. Updates on the Knowledge Hub’s  ongoing activities were shared. In particular, it was announced that the Ministry of Labour, Employment and the Social and Solidarity Economy of the Government of the Grand Duchy of Luxemburg funded the project “The Knowledge Hub package proposal: The SSE Encyclopedia and the UNTFSSE position paper”, which will be implemented by UNRISD and the ILO on behalf of the UNTFSSE.

Two ideas proposed by CSEND and RIPESS were discussed, as part of new possible future workstreams of the UNTFSSE. As part of updates from members, Social Economy Europe (SEE) shared their recent work and SEE’s recent policy paper Co-designing the Action Plan for the Social Economy: for an economy that works for people and the planet. This policy paper aims at feeding the debate on co-building the European Action Plan for the Social Economy, that will be presented by the European Commissionion the fourth trimester of 2021.

The meeting continued with the presentation of the current communication strategy of the task force, including the new tools of sharing relevant information of members, and especially on events, projects and publications.