UNTFSSE virtual event – “Why does SSE matter for the Agenda 2030 and the recovery post Covid-19?” within the framework of GSEF Global 2020 Virtual Forum 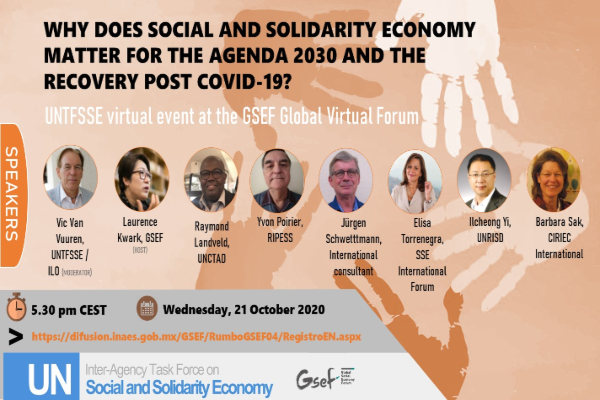 The United Nations Inter-agency Task Force on Social and Solidarity Economy (UNTFSSE) hosts a virtual event on “Why does SSE matter for the Agenda 2030 and the recovery post Covid-19?” on 21 October 2020 between 5:30 and 7:00 pm (CEST).

This webinar is organized in the framework of GSEF Global Virtual Forum 19-23 October 2020 on “Great Challenges, Greater Solidarity: Power of Community and SSE as path for transformation”. Here the full program.

It aims to examine how SSE institutions can play a transformative role in achieving multiple Sustainable Development Goals (SDGs) and can be a powerful tool to mitigate the impact of crises. However, since SSE is often not sufficiently recognized by national and international decision makers, the speakers will present and discuss strategies to promote and mainstream SSE into the national and global agendas.

The session will introduce the work of the UNTFSSE in raising visibility on SSE and creating partnerships at the global level. The UNTFSSE action plan 2020-2022 and the UNTFSSE statement on “What role for the Social and Solidarity Economy in the post COVID-19 crisis recovery?” will also be presented by the speakers. The virtual event will be held in English and Spanish.

More information of the speakers:

Vic van Vuuren, Chair, UNTFSSE / Director of Enterprises Department, ILO (Moderator)
Vic Van Vuuren is the Director of the Enterprise Department at the ILO, Geneva. The Enterprise Department promotes Decent Work by supporting sustainable enterprises and strengthening the institutions and governance systems which nurture enterprises. As Director of the Department, Mr van Vuuren oversees a large portfolio of programs that promotes sustainable enterprises. Mr van Vuuren joined the ILO in 2009 as the Director of the ILO Decent Work Team for Southern and Eastern Africa. Prior to joining the ILO, he was the Chief Operations Officer at Business Unity South Africa and representative for business at the South African Economic, Development and Labour Council (Nedlac). In this capacity he was also an employer member of the ILO Governing Body. He is currently the Chair of the United Nations Task Force on the Social and Solidarity Economy.

Laurence Kwark, Secretary General, GSEF (host)
Laurence KWARK is the General Secretary of GSEF (Global Social Economy Forum) since Feb 2016, working for the International Recognition & Visibility of Social and Solidarity Economy and the promotion of international exchange and cooperation between local governments and social economic networks. She had worked from 1998 to 2008, as a programme manager for South America and Asia at the “Terre d’avenir & CCFD”, an International Development NGO of France. She had also worked as the General Secretary of the Pax Romana ICMICA (International Catholic Movement for Intellectuals and Cultural Affairs) in Geneva for 2009-2012 then from 2013 till February 2016, as the Representative of Pax Romana to UN in Geneva. She had graduated Sejong University in Seoul in 1983 and got her master’s degree in Sociology in 1993 from the French Institute of High Studies in Social Sciences (EHESS) in Paris, France.

Raymond Landveld, Economic Affairs Officer, UNCTAD
From October 2017, Mr. Raymond Landveld is serving as an Economic Affairs Officer in the New York Office of UNCTAD Secretary-General following employment in 2016-2017 by the Financing for Development Office of the Department of Economic and Social Affairs. Mr. Landveld was a Surinamese diplomat posted at the Permanent Mission of Suriname to the United Nations in New York from 2007 to July 2016. Before his posting to New York, Mr Landveld served the United Nations Development Programme as the National Coordinator for the Global Environment Facility- Small Grants Program in Suriname (2003-2006). Previous employment in Suriname included Project Coordinator at Conservation International Suriname (2001-2003) and Coordinator for programs for indigenous peoples and Maroons with the National Forum of Non-Governmental Organization’s for Sustainable Development and Poverty Eradication in Suriname (1995-2000). Mr. Landveld graduated in 1994 as Doctorandus in Economic Sciences from the Anton de Kom University of Suriname and worked for a year with the Suriname State Mining Company.

Yvon Poirier, Special Advisor – Advocacy and Governance, RIPESS
Yvon Poirier (Canada) is involved in the Intercontinental Network for the Promotion of Social Solidarity Economy (RIPESS) since 2004. He represents the Canadian Community Economic Development Network (CCEDNET) in RIPESS. He is a member of the RIPESS delegation to the UNTFSSE, one of the original Observers in the Taskforce, since the first meetings. He participated in the UNTFSSE Seminars in Rome (2016) and Trento (2019). Since early 2018, he has been involved in all steps of preparations for a UN Resolution on SSE. He has published different documents on Public Policies and as well as a history on the origins and evolution of key concepts: social economy, solidarity economy, social and solidarity economy as well social solidarity economy. His Laval University studies were in Political Science before he became a college teacher in social sciences in Quebec City. During his teaching years, he was an active unionist and was involved in community organisations in the revitalization of poor neighborhoods. After his retirement as a teacher in 1997, he had voluntarily devoted his time to networking in his home city, in Canada and internationally in RIPESS.

Jürgen Schwettmann, International consultant and ex-officio at ILO
Jürgen Schwettmann, a German national, has been working in international development cooperation since 1979, specializing in co-operative development, the social and solidarity economy, rural development, and the informal economy. He has been an official of the International Labour Organization (ILO) for 28 years, holding different positions, including Director of the Partnerships and Development Cooperation Department (Geneva), Deputy Regional Director for Africa (Addis Ababa), Director of the ILO Office for East Africa (Dar es Salaam), Chief of the ILO Co-operative Branch (Geneva), and Regional Advisor on Co-operatives (Kinshasa and Yaoundé). Before joining the ILO, Mr. Schwettmann served as rural finance advisor for the German technical assistance agency GIZ in Cameroon, and as management advisor to several coffee-marketing cooperatives in Cameroon. After retiring from the ILO in October 2015 Mr Schwettmann works as an independent consultant for various multilateral and bilateral development cooperation agencies.

Elisa Torrenegra, Co-President, SSE International Forum
Elisa Torrenegra Cabrera is the Executive Director of Gestarsalud since 2002 while also being the Co-president of the International Network of Social and Solidarity Economy (ESS-SSE Forum International) and the Vice-president of the Latin American Association of Mutual Benefit Societies. She is a doctor, specialized in International Social Security and Service Management, who has undergone special training, held for Latin-American leaders in the healthcare system, in the universities of Harvard, Warwick and Oxford. Additionally, she holds a master’s degree in Quality Management from the University of Murcia, Spain and training in 6 Sigma.

Ilcheong Yi, Senior Research Coordinator, UNRISD
Ilcheong YI is Senior Research Coordinator at UNRISD. He is in charge of Social and Solidarity Programme and UNTFSSE Knowledge Hub. He is currently supervising several project directly related to SSE, such as Sustainable Development Performance Indicators, SSE Statistics, and Guidelines on public policy for SSE at the city and provincial levels. He joined UNRISD in October 2008. Born in the Republic of Korea, he was trained as a political scientist (B.A. and M.A. from the Department of Political Science, Seoul National University) and as a social policy analyst (D.Phil from Oxford University). His specialization is in the issues of poverty, social policy, labour policy, social economy, and historical analysis of the economic and social development process. Prior to joining UNRISD, Ilcheong Yi was Associate Professor at Kyushu University, Japan (2004-2008), Korea Foundation Visiting Professor in the Department of East Asian Studies, University of Malaya, Malaysia (2003-2004), and Visiting Research Fellow at the Stein Rokkan Centre, University of Bergen, Norway (2002-2003). He has fulfilled a number of consultant, field researcher and project development roles for international and national organizations including the ILO, UNRISD, JBIC and KOICA.

Barbara Sak, Managing Director, CIRIEC International
Barbara Sak is Senior economic researcher and Managing Director of CIRIEC (International Centre of Information and Research on Public, Social and Cooperative Economy), on CIRIEC’s payroll for nearly 30 years. Active in the field of services of general and collective interest, be they of economic or non-economic nature, and concerning public enterprises, her main field of expertise consists in public policy issues regarding regulation, provision and organisation modes, financing and evaluation of such services, notably with respect to the various types of providers, including those stemming from the public sector and the so-called third sector or social economy (namely, cooperatives, mutual associations, foundations, not-for-profit organisations). More recently, she focuses on transdisciplinary approaches of impact measurement and achievement of Sustainable Development Goals, for instance through socially responsible public procurement.