UNTFSSE virtual event: “What role for the Social and Solidarity Economy in the post COVID-19 crisis recovery?” 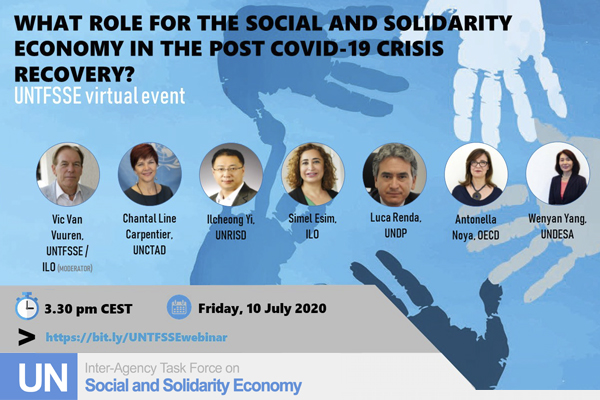 This webinar aims to examine how and why the SSE plays – in a pluralist economy – a transformative role in pursuing the SDGs and highlight the urgency to unlock its potential to tackle the current structural economic, societal, social and environmental crises.

The session will also be an opportunity to present the UNTFSSE statement on “What role for the Social and Solidarity Economy in the post COVID-19 crisis recovery?”. Based on UNTFSSE experience and international evidence, the panel discussion will reflect on different roles of the SSE in a “better recovery”. The virtual event will be held in English. A livestreaming on the UNTFSSE channels will be available, along with the recording of the event.

Vic Van Vuuren is the Director of the Enterprise Department at the ILO, Geneva. The Enterprise Department promotes Decent Work by supporting sustainable enterprises and strengthening the institutions and governance systems which nurture enterprises. As Director of the Department, Mr van Vuuren oversees a large portfolio of programs that promotes sustainable enterprises. Mr van Vuuren joined the ILO in 2009 as the Director of the ILO Decent Work Team for Southern and Eastern Africa. Prior to joining the ILO, he was the Chief Operations Officer at Business Unity South Africa and representative for business at the South African Economic, Development and Labour Council (Nedlac). In this capacity he was also an employer member of the ILO Governing Body. He is currently the Chair of the United Nations Task Force on the Social and Solidarity Economy.

Chantal Line Carpentier (Canada) currently serves as Chief of the United Nations Conference on Trade and Development (UNCTAD) New York office of the Secretary-General since 2014. Prior to this, she was actively involved in the successful negotiations of the SDGs for the Department of Economic and Social Affairs (DESA). During her tenure with DESA, she served as the Major Groups coordinator to enhance non-state actors engagement with the United Nations and was also the focal point for sustainable consumption and production, food security and sustainable agriculture. She has co-authored a book on Ethical Investing (2008) and regularly publishes journal, articles, book chapters and SG reports on the intricate relationships between sustainable development policies, trade, equality and agriculture.

Wenyan Yang is the Chief of Global Dialogue on Social Development Branch in the Division for Inclusive Social Development of UN Department of Economic and Social Affairs. She is the Division’s focal point coordinating the support to the UN Commission for Social Development and supervises the preparation of the department flagship publication World Social Report. She has many years of experience in social and economic policy analysis, and in providing substantive and technical support to UN inter-governmental bodies. Her recent work has focused on poverty, inequality, decent work and social protection, and inclusive development. Previously Ms. Yang worked on gender issues in the Division for the Advancement of Women. Currently she is the Principle Gender Focal Point of her Department. She started her UN career as an economic affairs officer in the Macroeconomic and Development Policy Analysis Division, where she contributed to the major departmental publication World Economic and Social Survey and was part of the Secretariat to the ECOSOC expert body Committee for Development Policy, with the main responsibility to provide technical analysis for the Committee’s work reviewing the inclusion in and graduation from the list of Least Developed Countries.

Antonella Noya is the Head of the Unit on Social Economy and Innovation at the Center for Entrepreneurship, SMEs, Regions and Cities. She organises and coordinates the work on social economy, social entrepreneurship, and social innovation inside her Directorate . Antonella leads the cooperation with the European Commission (DG EMP, DG GROW, EEAS) in these areas of work. Antonella has a university degree in political sciences, a specialisation in legislative drafting and a post degree diploma in economics of territorial development and urban planning from La Sorbonne . She speaks fluent English, French and Italian and fair Spanish. Antonella sits in various national and international scientific and steering committees and advisory boards (including the French National Steering Group on Social Impact Investing, Convergences, INCO.ORG). She represents the OECD at the United Nations Taskforce on Social and Solidarity Economy, and at the GECES (Group of Experts on Social Economy and social enterprises) coordinated by the EC.

Simel Esim is a political economist, working in social and economic development for the past 30 years. She has been the Manager of the Cooperatives Unit at the International Labour Office (ILO) in Geneva since 2012. The Unit, which has been in existence since 1920, serves the ILO constituents on issues related to cooperatives and the wider social and solidarity economy through research, policy advice, training and development cooperation guided by the ILO Recommendation on the Promotion of Cooperatives, 2002 (R.193). From 2004 to 2012, Simel Esim was a Senior Technical Specialist in the ILO’s Regional Office for Arab States. Prior to the ILO, she worked in the International Center for Research on Women in Washington, DC. In addition to cooperative and social and solidarity economy development, she has experience working on informal economy, labour migration and gender equality issues. Simel Esim also has policy advocacy, research, capacity building, programme management and evaluation experience. She holds a B.A. in political science, an M.A. in International Economics and Middle East Studies and a Ph.D. in Economics with a concentration in gender and development economics.

Luca Renda is Head of Recovery Solutions and Human Mobility within the UNDP crisis Bureau. He has over 20 years of experience working in a variety of development settings with the UN, in roles of increasing responsibilities since his first assignment as UN Volunteer in Liberia back in 1997. In UNDP, Luca has served as Program Manager in the Emergency Response Division (1999-2000) and RBLAC (2000-2004). He has been Deputy Resident Representative in Ecuador (2004-2007) and Honduras (2007-2012), and Country Director in Lebanon (2012-2017), where he positioned UNDP as a lead agency within the UN response to the Syrian crisis.  Between 2017 and 2020, while serving as Senior Strategic Advisor for the Bureau for Latin America and the caribbean, he has undertaken special assignments such as Head of the UN Crisis Management Unit in Dominica, coordinating UN and UNDP post-disaster recovery efforts; Resident Representative a.i. in Guyana; and RBLAC Special Advisor for the UN transition in Haiti. He has also served as Head a.i. of the SDG Integration Team in BPPS. Luca holds a Degree with highest honors in Political Science and International Relations and a Master of Science in Development from the London School of Economics. He is married with two children.

Ilcheong YI is Senior Research Coordinator at UNRISD. He is in charge of Social and Solidarity Programme and UNTFSSE Knowledge Hub. He is currently supervising several project directly related to SSE, such as  Sustainable Development Performance Indicators, SSE Statistics, and Guidelines on public policy for SSE at the city and provincial levels.  He joined UNRISD in October 2008. Born in the Republic of Korea, he was trained as a political scientist (B.A. and M.A. from the Department of Political Science, Seoul National University) and as a social policy analyst (D.Phil from Oxford University). His specialization is in the issues of poverty, social policy, labour policy, social economy, and historical analysis of the economic and social development process. Prior to joining UNRISD, Ilcheong Yi was Associate Professor at Kyushu University, Japan (2004-2008), Korea Foundation Visiting Professor in the Department of East Asian Studies, University of Malaya, Malaysia (2003-2004), and Visiting Research Fellow at the Stein Rokkan Centre, University of Bergen, Norway (2002-2003). He has fulfilled a number of consultant, field researcher and project development roles for international and national organizations including the ILO, UNRISD, JBIC and KOICA.