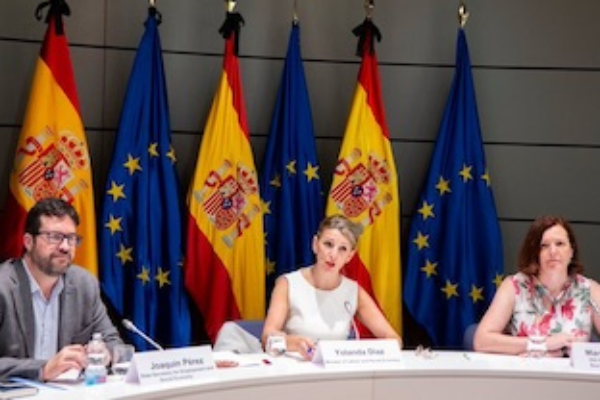 On 28 May 2020, the Spanish Minister of Labour and Social Economy Ms. Yolanda Díaz chaired the first meeting via video conferencing as President of the Monitoring Committee of the Luxembourg Declaration. The Spanish Government succeeded the French Government this year.

The Director of ILO Enterprises Department and and Chair of the UNTFSSE, Mr. Vic Van Vuuren, and two officials from ILO Cooperatives Unit, Mr. Roberto di Meglio and Ms. Valentina Verze, represented the UNTFSSE and the ILO.

The meeting served to reinforce the attendees’ commitment to promote the social economy, which was defined by Minister Díaz as “part of the solution to the crisis and key actor in the recovery after the COVID-19 pandemic”. Moreover, the Spanish Minister announced a decision to designate the city of Toledo as the European social economy capital 2020 and a project to carry out the satellite accounts of the social economy in Spain.

Several government representatives, including the Italian Minister of Labour and Social Policies Ms. Nunzia Catalfo, emphasized their interest in enlarging the Monitoring Committee to other EU members states; the importance of taking into account SSE enterprises and organizations in the design and implementation of national and European recovery measures from COVID-19; and the strong commitment into realizing a European Action Plan for the Social Economy. Other government representatives, such as the French High Commissioner for Social and Solidarity Economy and Social Innovation Mr. Christophe Itier, also stressed the importance of a European commitment to promote SSE at the global level, through engaging in the Pact for Impact initiative and tabling a resolution on SSE to UN General Assembly.

In his intervention, Mr. Vic van Vuuren welcomed the interest of governments in tabling a UN resolution on SSE. He further emphasized the urgency to preserve and create jobs, considering that the current crisis is not affecting all populations in the same way. He noted that SSE organizations and actors could be essential partners in promoting a better recovery through the promotion of “planet sensitive and people-oriented businesses”.