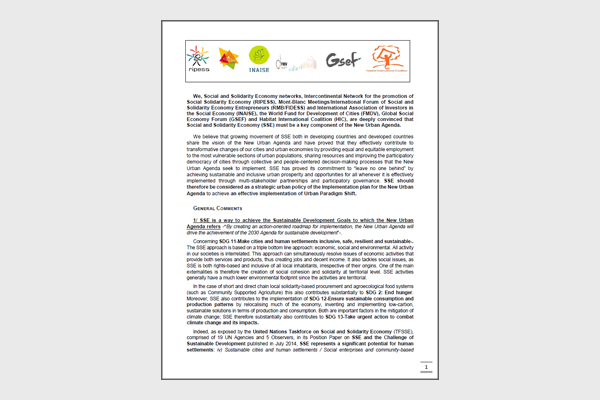 SSE was brought to the attention of the office of Habitat III, due to a letter sent to the office urging that SSE must be included in the New Urban Agenda. Below is the full letter in detail.

We believe that growing movement of SSE both in developing countries and developed countries share the vision of the New Urban Agenda and have proved that they effectively contribute to transformative changes of our cities and urban economies by providing equal and equitable employment to the most vulnerable sections of urban populations, sharing resources and improving the participatory democracy of cities through collective and people-centered decision-making processes that the New Urban Agenda seek to implement. SSE has proved its commitment to “leave no one behind” by achieving sustainable and inclusive urban prosperity and opportunities for all whenever it is effectively implemented through multi-stakeholder partnerships and participatory governance. SSE should therefore be considered as a strategic urban policy of the Implementation plan for the New Urban Agenda to achieve an effective implementation of Urban Paradigm Shift.

Concerning SDG 11 – Make cities and human settlements inclusive, safe, resilient and sustainable. The SSE approach is based on a triple bottom line approach: economic, social and environmental. All activity in our societies is interrelated. This approach can simultaneously resolve issues of economic activities that provide both services and products, thus creating jobs and decent income. It also tackles social issues, as SSE is both rights-based and inclusive of all local inhabitants, irrespective of their origins. One of the main externalities is therefore the creation of social cohesion and solidarity at territorial level. SSE activities generally have a much lower environmental footprint since the activities are territorial.

In the case of short and direct chain local solidarity-based procurement and agroecological food systems (such as Community Supported Agriculture) this also contributes substantially to SDG 2: End hunger. Moreover, SSE also contributes to the implementation of SDG 12 – Ensure sustainable consumption and production patterns by relocalising much of the economy, inventing and implementing low-carbon, sustainable solutions in terms of production and consumption. Both are important factors in the mitigation of climate change; SSE therefore substantially also contributes to SDG 13 – Take urgent action to combat climate change and its impacts.

Indeed, as exposed by the United Nations Taskforce on Social and Solidarity Economy (TFSSE), comprised of 19 UN Agencies and 5 Observers, in its Position Paper on SSE and the Challenge of Sustainable Development published in July 2014, SSE represents a significant potential for human settlements: iv) Sustainable cities and human settlements / Social enterprises and community-based organizations possess features with considerable potential for helping build sustainable cities. They can promote social and environmental goals through, for example, proximity services (including healthcare, education and training), promoting local culture, urban and peri-urban agriculture, community renewal, fair trade, access to affordable accommodation, renewable energy, waste management and recycling, low-carbon forms of production and consumption, and broader livelihood security. Their rootedness in local knowledge and their internal democratic structure offer some means of achieving integrated forms of socially and politically sustainable urban development.

Furthermore, the UN Inter-Agency Task Force on Social and Solidarity Economy has just released a position paper Realizing the 2030 Agenda through Social and Solidarity Economy. The paper clearly identifies how SSE acts locally and can have a positive impact: “As most SSE initiatives are rooted in the local economy, SSE can play a major role supporting an inclusive and sustainable local development. In the framework of localizing SDG implementation, SSE has the potential to complement a broader Local Economic Development (LED) approach by matching and enabling linkages between unmet needs for employment, income, goods and services and the sustainable use and valorization of local assets and resources, including those associated to the livelihoods’ endowment of disadvantaged and marginalized groups”. Pursuing the same path as the 2014 paper, the approach is reaffirmed: The UN Task Force strongly believes that SSE should be recognized as an important means of implementation of the 2030 Agenda for Sustainable Development and the realization of the Sustainable Development Goals.

2/ SSE has been included and recognized in the New Urban Agenda process.

The declarations of the consultative meetings in preparation of HABITAT III, Montréal, Mexico and Barcelona – include SSE as an approach of great importance to meet many of the challenges facing urban areas. The Barcelona declaration proposes to “promote the mainstreaming of social and solidarity economy in all sectors as an inclusive, viable human-rights based economic alternative and key lever for the future of cities”. HABITAT lll, as a United Nations process, is human rights-based and focused. SSE is fully inclusive and implements human rights, especially the economic, social and cultural rights that are indivisible. It is therefore important to recognise it fully as a natural part of the Hlll process.

The Global Taskforce recommendations on the zero draft of the New Urban Agenda issued during the Local Authorities Hearings, New York, May 2016, adopted the following recommendation: “6. Recognize Social and Solidarity Economy and Finance (SSEF): historically, the social and solidarity economy and finance constitute a source of resilience to the recurrent systemic crises; they are conducive to partnerships that will bring about transformational changes in urban development patterns. The creation of enabling environments (especially in terms of regulations and knowledge sharing) should be included in the New Urban Agenda.”

3/ The valuable contribution of SSE activities has been recognized by local governments who have adopted policies and programs to promote SSE.

Everywhere on the planet, partnerships between Local Authorities and local actors have been developed in recent years, with increasingly prominent networks around the world all making significant contributions, such as the European Network of Cities and Regions for the Social Economy (REVES), the Network of Local Authorities for solidarity economy (RTES) Network of Municipalities for the Social Economy in Catalonia. 40 municipalities in Brazil also have specific legislation that includes SSE. Montreal has a partnership with social economy organisations to support the sector. Seoul has set up multidimensional support system by proposing legal, financial, institutional and technical assistance including creating an intermediary support networks and institutions to build stakeholders’ capacities and ensure better access both to private and public markets, as well as the creation of six Social Economy Special Zones to create an eco-system to foster social economy. Quezon City in the Philippines has a department for cooperative development. It is indeed at local level that the many issues of the New Urban Agenda should and must be addressed, so the role of Local Authorities is indeed crucial to the process.

Considering that HABITAT lll, as United Nations process, is human rights-based and focused. Considering that SSE is fully inclusive and echoes and implements human rights, especially the economic, social and cultural rights that are indivisible, it is therefore important to recognise it fully as a natural part of the HABITAT III process.

Considering that SSE «relocalises» the economy, thus creating sustainable solutions in terms of production and consumption (SDG 12) that are an important factor in the mitigation of climate change (SDG 13) and ending hunger (SDG 2).

Considering we believe in a plural economy where SSE, private sector and public sector get along and collaborate with each other. Considering that SSE manages services of general interest that meet the needs of local residents placing the community above profit.

Considering that SSE activities and practices in the following fields already exist in many urban areas and have great potential for meeting the challenges of urban areas:

Considering that SSE is enabling for all three transformation commitments in the New Urban Agenda: leave no one behind and fight against poverty; urban prosperity and opportunities for all; and ecological and resilient cities and human settlements (Par.19),

We propose the following addition to the New Urban Agenda:

At the end of paragraph 22
Stressing that spatial organization, patterns and design of urban space together with development policies can promote or hinder social cohesion, equity, and inclusion, as well as the reduction of poverty and hunger. The New Urban Agenda promotes people-centred urban development and the realization of human rights of all, facilitating living together, combating discrimination in all its forms, and empowering all individuals and communities, while enabling their full and meaningful participation. Social and Solidarity Economy has an important potential for a people-centered urban development.

At the end of paragraph 47
We commit to developing vibrant, inclusive and sustainable urban economies, building on local resources and competitive advantages, including modern infrastructure and cultural heritage, with increased levels of productive employment and decent work. In this regard, support to innovative and sustainable solutions will be provided in order to trigger the potential for a high degree of connectivity and consequent intense economic and social interaction between a larger and diverse range of people, skills, business and market opportunities, all of which contribute to the positive externalities that cities can create, maximizing economies of agglomeration. Scaling up existing Social and Solidarity Economy activities and practices has the potential to meet these challenges, in particular in creating decent jobs, social innovation and mobilising citizens to build local solutions to local problems.

At the end of paragraph 68
The New Urban Agenda aims to achieve ecologically sustainable cities and human settlements, strengthening resilience in urban areas with varying characteristics and locations, while changing the root causes of prevailing perception of cities as a significant source of negative ecological impacts to a source of solutions to sustainability issues. The Agenda reiterates the ecological and social function of land and promotes a change in the consumption and production patterns, ensuring that they will not exceed the ecosystem’s regenerative capacity. Social and Solidarity Economy activities already represent approximately 8-10% of GDP in cities, and are at the heart of ecologically sustainable activities such as territorial food systems based on small-scale agroecological food production, local production of goods and services, renewable energies, recycling and reuse.