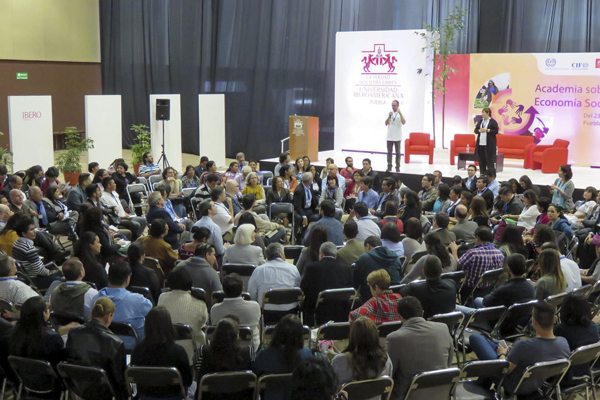 Since the 2008 financial crisis, economic development has been reconsidered and innovative approaches are becoming increasingly relevant internationally. The ‘Social and Solidarity Economy’ (SSE) is a chief player among these approaches. Because SSE organizations pursue both economic and social objectives, they play a major role in creating and securing decent employment and income. ILO’s efforts on the SSE have been of various natures, from technical activities (advice on policy and law, access to finance, organizational development, capacity building, international networking, etc.) to establishing international partnerships and politically influencing high level Government decision making, in different settings (informal and formal economy, rural and urban communities, a variety of economic sectors and sub-sectors) or working with people from all backgrounds in global networks. Among these efforts, the ‘ILO Academy on Social and Solidarity Economy’ emerged as a hub and catalyser of innovative initiatives to support the SSE and enhance the ILO’s endeavour on promoting Decent Work for all.

It started as a high level capacity building programme, which was proposed by more than 200 practitioners on the occasion of the ‘ILO Regional Conference on Social Economy’ held in Johannesburg in October 2009. This proposal developed into the first edition of the SSE Academy, organized in Italy (2010) by the International Training Centre of the ILO (ITC-ILO). The second edition happened in Montreal (2011), attuned to the 1st International Forum on the Social and Solidarity Economy (FIESS) which was held in the same city in the previous week. The third edition happened in Agadir (2013) in collaboration with the REMESS (Réseau Marocain de l’Economie Sociale et Solidaire). The fourth and fifth editions were held respectively in Brazil (2014) and South Africa (2015) and had a strong focus on knowledge exchanges and collaboration between Latin America and Africa.

The most recent edition of the SSE Academy happened in Puebla (23-27 Nov 2015) in partnership with the Mexican National Institute of Social Economy (INAES) and the Ibero-American University in Puebla. It gathered more than 200 participants from about 20 different countries and had a particular focus on SSE public policies in Latin America and the Caribbean. The ILO Academy on SSE lasts one week and gathers policymakers, practitioners, promoters, workers and researchers from all around the world. Its flexible and interactive dynamics allows for an enriching experience both for long-experienced experts and newcomers in the theme. The conversations and debates throughout the Academy comprise the understanding of concepts related to Social and Solidarity Economy, the relevance of this perspective as a new development alternative, modalities and strategies of implementation and the innovative creation of communities of practice and collaboration. Participants of the SSE Academy often express wonder and appreciation concerning the easiness with which they assimilate and enhance in-depth knowledge and the spontaneity in which they meet new people and forge key relationships. In addition, participants also have the chance to perform field visits to local SSE enterprises or projects and to discuss these local experiences as to other cases from all around the world. Furthermore, in the last editions of the SSE Academy a distance-learning package introducing principles and practices of the SSE became available for the participants before the face-to-face sessions.

Since 2012, the ILO has also been fostering the emergence of a multilingual virtual community of knowledge exchange and cooperation around the activities of the SSE Academy. This effort started with the launching of an open interactive virtual space called ‘Collective Brain’ of the SSE Academy (http://ssecollectivebrain.net/). This multilingual space allows that participants and former participants of the SSE Academy keep permanently connected and involved in order to exchange and deepen knowledge on SSE. This initiative was later further expanded with the introduction of a specific virtual area for South-South and Triangular Cooperation (SSTC) on the SSE, which was named ‘Meeting Point’ for SSTC on the SSE (https://www.southsouthpoint.net/). Based on the principle of solidarity and non-conditionality, the SSTC can be regarded as a SSE compatible approach for sharing experience and good practices and for supporting capacity development, technology transfer and even resource mobilization or the formation of international chains and networks of production and consumption. The multilingual virtual community clustered around the SSE Academy has today around 700 members from all continents, who either participated in at least one of its editions or became actively interested in the Academy by somehow interacting with its former participants.

The materials of the 6th ILO Academy on Social and Solidarity Economy (including presentations, documents, photos and videos) can be accessed by the link: http://eepurl.com/bHJlbb