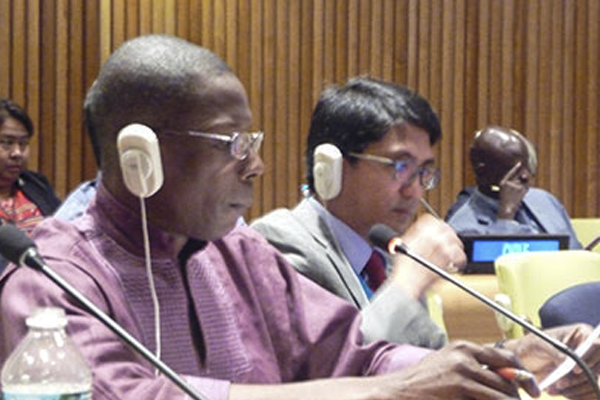 This last 26 September, Madani Koumare from RENAPESS Mali made the case for a paradigm shift and social solidarity economy during the United Nations Sustainable Development Goals Summit 2015 in NY.

Here are his speaking notes, reposted from www.ripess.org

As an organization promoting the social and solidarity economy, we believe it is time to change the paradigm, and that from now on, the efforts need to be directed towards the creation of decent income for the most vulnerable. As such, our work consists of generating and supporting initiatives that create for vulnerable people, who are not incapable persons, promising opportunities to affirm their talents of social entrepreneurs.

The economic and financial crises have clearly shown the limits of the dominant system, while providing opportunities for social and solidarity economy organizations to assert alternatives and to demonstrate that there is another way to think about international economic relations and practices, harmoniously articulating economic rigor and human development.

In such, the trend of economic growth that has been visible in Africa for more than five (5) years, did not materialize everywhere into improved socio-economic indicators.

Poverty and inequality in access to basic social services and to economic opportunities persist, especially for youth, women, the elderly and people with disabilities.

It is in this context that since 2003, RENAPESS-Mali works to catalyze production and processing activities with a high added value that are based on the use of techniques and technologies accessible to small farmers, fishermen and craftsmen. We have clearly shown that this is an avenue for improving access to health, education, food, housing and decent jobs for the thousands of young people and women who, for reasons of economic insecurity and conflicts, usually caused by deficits of political and economic governance, are forced into exile and migration to destinations where they are very quickly disenchanted when they make their way, with very little means, through the deserts and oceans.

To achieve the new development goals for 2030, Member States undertaking commitments for the sustainable development agenda must develop and implement locally policies and concrete social actions to encourage:

It is with these views that RENAPESS, with the use of solidarity mechanisms of access to finance and a technical support tailored for each initiative, has allowed the insertion of almost one thousand women with economic and social initiatives in sectors as diverse as promoting and adding value to local food products, preschool education, poultry and livestock farming, the production of cosmetics… and that is, only in 2015.

With a rising collective awareness on the challenges of sustainable development, we must make the right to development an imperative to boost a new order in international cooperation and solidarity. The foundations of this right will be the dialogue between the partners and the co-development of concrete structuring lines of action on the ground.

In this historic summit, we call for the creation of a real global alliance of social and non-governmental organizations and international cooperation institutions to promote new opportunities for sustainable inclusive growth (job and income creation, collective social infrastructure…).

The post-2015 agenda must include clear strategies for global and local governance, intended to help the poor countries in the development of autonomous capabilities for using more responsibly their natural resources and allocating the resulting resources to economic, social and cultural development programs that respect the environment.

The dynamics initiated in several African countries and in my country, Mali, in particular, consisting of the co-construction of public policies by governments and civil society like RENAPESS, already encourage the promotion and exchange of best practices, international discussions and pooling of expertise with various different networks, such as the Intercontinental Network for the Promotion of Social Solidarity Economy (RIPESS) with the approach of a shared vision.

Let’s work together, continuously, to repair the historic responsibility and to comply with our moral obligation and citizen’s duty to preserve the environmental, economic and social dimensions of development for future generations!”