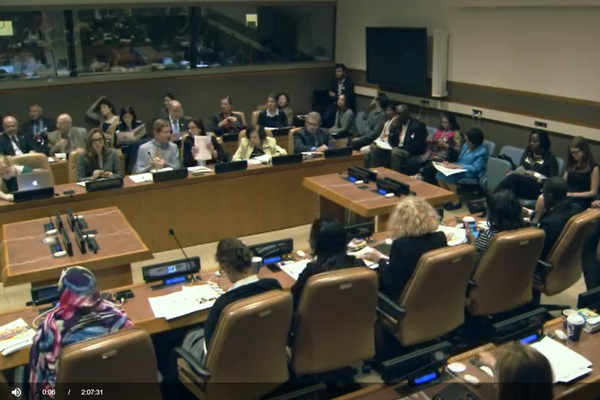 This Monday, Paul Ladd, incoming Director of UNRISD and current Director of the UNDP Team on the Post 2015 Development Agenda, along with Gilbert Houngbo, Deputy Director General of ILO, Chantal Line Carpentier, Chief of UNCTAD in NY and Sharon Brennen-Halyock, Director of FAO in NY, represented the UN Inter-Agency Task Force on SSE at the high-level panel of the Leading Group on social and solidarity economy at the United Nations Headquarters in New York. Observers of the Task Force, including RIPESS and ICA were also participating.

The event was organised by France on behalf of the Leading Group and coordinated by its permanent secretariat, The Mont-Blanc Meetings (MBM) in collaboration with UN-NGLS.

Members of the International Leading Group on SSE included representatives from Colombia, Cameroon, the First Lady of Costa Rica, Mercedes Peñas, the Minister of Foreign Affairs and Cooperation of Morocco, Salaheddine Mezouar, the French Minister of State for Development and Francophony and François Hollande, President of France.

The Task Force has collaborated closely with the Mont-Blanc Meetings to push for governmental recognition of SSE, culminating in the creation of the Leading Group. Since then the Task Force has continued to work closely with the Leading Group, including active participation in a side event organized by the Leading Group at the Third Financing for Development Conference held in Addis Ababa in July this year. Further collaboration to strengthen SSE and develop its potential as means of implementation of the SDGs is foreseen.

Members of the Leading Group endorsed a draft Declaration prepared in collaboration with the Task Force and calling for SSE to be considered an integral part of the implementation of the SDGs.

You can watch the event here.