What can SSE do for food security and nutrition? 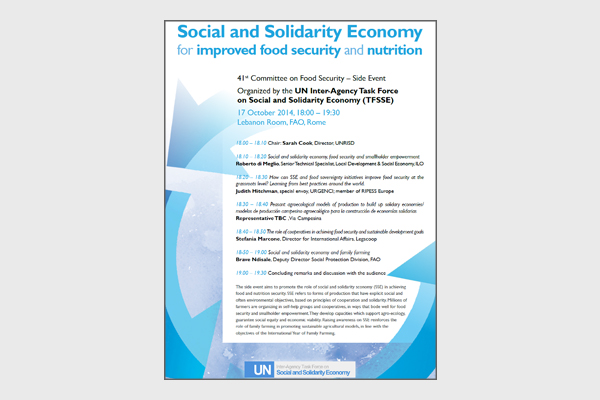 The UNTFSSE held a side event on “Social and Solidarity Economy for Improved Food Security and Nutrition” during the Committee on Food Security at the FAO on 17 October. UNRISD Director Sarah Cook chaired the session which included a panel of representatives from both the UN and civil society.

The speakers on the panel addressed a variety of topics. Roberto di Meglio (ILO) underlined that SSE organizations operating in rural contexts often provide conditions of decent work. While individual case studies illustrate the redistributive capacity of SSE and its potential to create employment, we need comprehensive numbers and statistics to support effective policy making. He also stressed that SSE and the concept of food sovereignty share common principles, such as local and social control of food systems, and smallholder empowerment through the realization of rights. Judith Hitchman (Urgenci) highlighted those forms of SSE organization that embrace the values of food sovereignty, such as community-supported agriculture and fair trade, collective kitchens, and inclusive public procurement which sources locally produced food from small scale farmers. Rodolfo Greco (Via Campesina) spoke about food as a human right, and land as a common good. He illustrated his presentation with cases from Latin America.

Brave Ndisale, who is deputy director of the Social Protection division at the FAO, reminded the audience that family farming is the dominant form of agriculture in many developing countries. Boosting local economies is crucial in this context. But family farmers often face multiple challenges such as access to the markets and technology. This ultimately undermines productivity and food security. In the framework of 2014 International Year of Family Farming, the FAO underlines the need to strengthen producer organizations as they can promote capacity to innovate, facilitate access to markets and influence policy debates. Cases studies show that SSE organizations, because they operate based on collective action, tend to favour inclusion of vulnerable groups such as youth and women, as well as social equity and environmental sustainability.

The audience participated actively in the debates. Attendees underlined that precisely the poorest farmers do not always have the means to organize themselves. Local authorities need to be strengthened in order to support SSE organizations. It was also pointed out that in the global North, not all agriculture cooperatives actually operate based on principles of solidarity. The event concluded with the general agreement that SSE should be part of the UN agenda to foster sustainable development, and that more rigorous research is needed to support this objective.