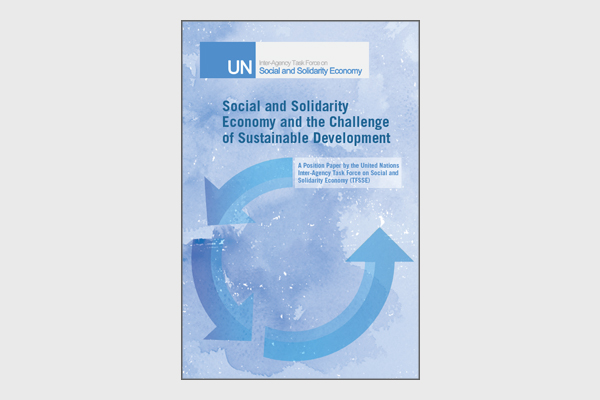 How can SSE best address some of the key challenges of the 21st century? What can it do for decent work, women’s well-being, greening the economy and transforming finance? This position paper has been prepared by members and observers of the TFSSE. It argues the post-2015 development agenda has paid insufficient attention to the Social and Solidarity Economy (SSE). Available in English, Spanish and Portuguese.

SSE refers to the production of goods and services by a broad range of organizations and enterprises that have explicit social and often environmental objectives. SSE organizations are guided by principles of cooperation, solidarity, ethics and democratic self-management. SSE includes cooperatives and other forms of social enterprise, self-help groups, community-based organizations, associations of informal economy workers, service-provisioning NGOs, solidarity finance schemes. The Task Force believes that SSE holds considerable promise for addressing the economic, social and environmental objectives and integrated approaches inherent in the concept of sustainable development. This paper illustrates this potential by examining the role of SSE in selected issue areas which, we believe, are central to the challenge of socially sustainable development in the early 21st century. They include:

The integrated, people-centred and planet sensitive approach inherent in SSE resonates with the post-2015 development challenges identified in the SDG process. Numerous constraints and tensions, however, impede progress in realizing the potential of SSE. It is important that government recognize the potential of SSE and also that the organizations and initiatives often operate in a disabling policy and legal environment. Trends associated with solidarity and cooperation at the level of SSE organizations need to be matched by solidarity and redistribution through the state via social, fiscal, credit, investment, procurement, industrial, training and other policies at different levels of government.