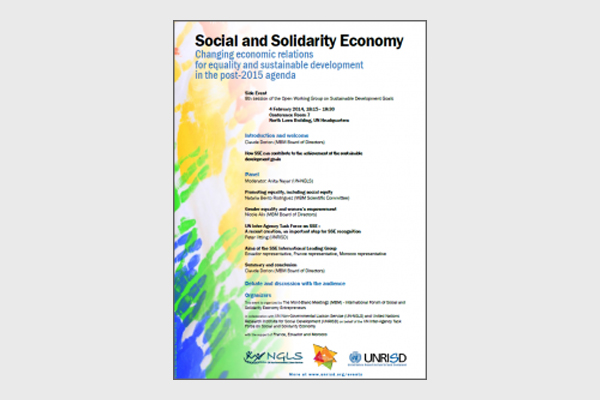 Speakers at the side-event titled “SSE: Changing economic relations for equality and sustainable development in the post-2015 agenda” presented to a packed room in the UN building in New York on 4 February 2014. The objective of the side event was to discuss how SSE can contribute to the achievement of the sustainable development goals.

Representatives of MBM Board of Directors and Scientific Committee provided an overall picture of SSE and how it relates to sustainable development and equality. Claude Dorion defined SSE as collective enterprises organized on principles of collective ownership, autonomy, and democratic governance, working towards social and environmental benefit rather than profit. Along with his colleagues Natalia Bento Rodriguez and Anaïs Amazit, Mr. Dorion shared key points from the declaration of the 2013 MBM annual meeting, held in Chamonix-Mont-Blanc, France, which outlined the values of SSE and a global action plan for SSE in relation to sustainable development and gender equality

Anita Nayar, Chief of UN-NGLS New York Office, and Vinicius Pinheiro, ILO Deputy Director in New York, representing two of the four (along with UNRISD and UNDP) co-founders of the UNTFSSE, provided an overview of the role of the UNTFSSE.

In recognition of the power of SSE as an enabler to achieve different dimensions of sustainable development that would feature in the SDGs, Mr. Pinheiro shared that the UNTFSSE intends to undertake work on research and statistics, to measure the size of SSE and its global impact. Ms. Nayar emphasized that UN-NGLS aims to raise the visibility of SSE through the ongoing intergovernmental processes leading to post-2015, through both the OWG and the Intergovernmental Committee of Experts on Sustainable Development Financing (ICESDF).

The event continued with reflections from three Member State representatives: Natalie Cely Suarez, Ambassador of Ecuador to the United States; Fanny Benedetti, European and International Affairs Office (France) representing Deputy Minister of France, responsible for SSE; and Soulaiman El Hajam, Deputy National Coordinator of the Human Development National Initiative of Morocco, Ministry of Interior. These representatives illustrated the progress of SSE in their respective countries, pointing to the importance of enabling legislation, an integrated approach, and the power of the State in supporting SSE through dedicated investment and public procurement. A lively discussion followed, featuring remarks from UNTFSSE observers RIPESS and ICA as well as other interested civil society and UN representatives. Particular mention was made of a process underway for the establishment of a Leading Group on Social and Solidarity Economy (modelled on the Leading Group on Innovative Financing for Development) that will bring together various stakeholders (like-minded governments, international organizations, and civil society networks) to foster collaboration and work in close collaboration with the UNTFSSE. France, Ecuador and Morocco are already part of this Leading Group, with plans for an official launch later this year.

See also the poster and programme of the event.