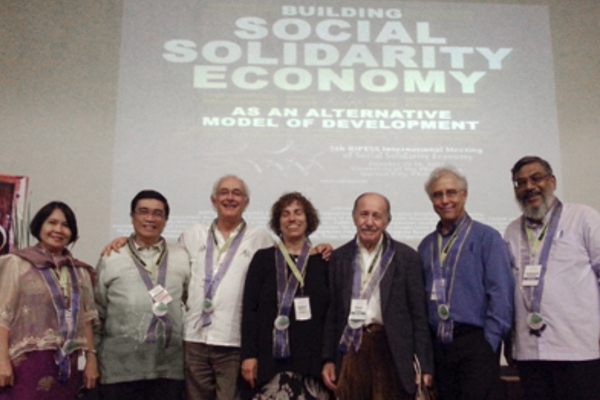 Welcoming the recent initiative of 14 United Nations agencies to establish an Inter-Agency Task Force on Social and Solidarity Economy, participants at the 5th RIPESS International Meeting on Social Solidarity Economy called on the new body to carry on the work begun this year by UNRISD and the ILO of organizing an annual conference on SSE. They further recommended that the Task Force be open to civil society participation. Delegates urged UN Secretary-General Ban Ki-moon and the high-level processes associated with the post-2015 agenda to heed the recommendations that emerged in the recent civil society consultation, organized by UN-NGLS, to allow SSE voices to be heard in the process of designing the future Sustainable Development Goals.

Held back-to-back with the ASEAN Leadership Forum, organized by the Kuala Lumpur-based Asian Strategy and Leadership Institute, the RIPESS meeting (15-18 October 2013 in Manila) brought together 653 participants from 31 countries. It was an opportunity for SSE practitioners and intermediary organizations to assess progress and engage policy makers from several Southeast Asian countries. While quite different interpretations of SSE emerged, there was a broad consensus on the importance of inclusive growth, solidarity, cooperation and community development as an alternative to neoliberal approaches and economic models centred on self-interest, profit maximization and consumerism. High-level political authorities in the Philippines, including Secretary of State for Social Welfare and Development Corazon Soliman, Senate Majority Floor Leader Alan Peter Cayetano, and Mayor of Quezon City Herbert Bautista, lent their support to the RIPESS and ASEAN Leadership Forum meetings, acknowledging the need for development alternatives and the crucial role of SSE in crafting a more just and equitable society.

The RIPESS meeting, the fifth of its kind held since 1997, took stock of the notable progress that has occurred in recent years in building SSE practices and networks in the six regions where RIPESS (Intercontinental Network for the Promotion of Social Solidarity Economy) is organized. While systematic data on SSE are still in short supply, some progress has been made in mapping SSE and understanding what role governments can play in enabling SSE. The meeting paid particular attention to critical issues such as public policy and law, as well as responsible governance of SSE and how to strengthen not only individual SSE organizations and enterprises, but also a territorial approach to SSE. Reflecting the strong participation of students in the conference, not least a lively delegation from Indonesia, significant attention focused on how SSE can engage, benefit and empower youth. The importance of seeing SSE from a gender perspective and raising the visibility gender issues in SSE practice, learning, advocacy and policy was fully endorsed by the conference.

In his keynote address, Mike Lewis, co-author of The Resilience Imperative, suggested that the power of SSE lay in what has long been its dual approach: “resist and build”. To this he added a third imperative: the need to strategize. “Remember we cannot do everything. Focused intention and strategy is critical to expanding the space occupied by the values and actors of the solidarity economy.” As priorities for action to leverage systemic change, he suggested focusing on three basic human needs—food, housing and energy—as well as three fundamental transitions:

from speculative finance to a financial system that serves people-centred production and exchange;
from privatization to community control of the commons; and
from the corporate imperative to maximize profits to maximizing mutual benefit through cooperation.

Speaking via video link, Pierre Calame, Chair of the Charles Leopold Mayer Foundation, cautioned against romanticizing SSE and pointed to the need to forge alliances with multiple social actors and movements, a point also emphasized by Nancy Neamtan, President of the Chantier de l’Economie Sociale. She noted significant advances in both thinking and advocacy in recent decades—from a time when social movements often bypassed economic issues, to the recognition that “economic development is our problem”. Advances also include going beyond simplistic dichotomies of state versus private ownership and control, and accepting the notion, popularized by Elinor Ostrom, that the best way to manage natural or common pool resources is often through democratic, citizen-controlled institutions. She also noted important progress in enabling SSE through public policy and law, not least in Quebec where a framework law has just been approved.

Pointing to the rise of a global SSE movement, Paul Singer, Brazil’s National Secretary of Solidarity Economy, said that values and practices that have existed for centuries, particularly among indigenous populations, are now finding spaces for expression in contemporary contexts of crisis, alienation and social movements activism. “These are exciting times”, he said, “for rethinking the meaning of development and for bringing back into the equation values such solidarity and happiness that have been neglected in modern times”.

The RIPESS conference was also an occasion to think outside the box. Presenting his vision of SSE development in the Philippines, Ben Quinones, Executive Coordinator of RIPESS and Chair of the Asian Solidarity Economy Council, called for the creation and consolidation of “SSE ecosystem zones”. He presented a proposal for a parliamentary bill whereby seven million hectares of idle public land would be allocated to 750 such zones. “If transnational corporations and foreign investors can enjoy the benefits of export processing zones that simplify their regulatory environment and provide various incentives”, he argued, “why shouldn’t SSE enjoy similar advantages of privileged zones for compatible activities?” The proposed parliamentary bill draws on the definition of SSE used by UNRISD, which is included in the keynote address I delivered to the ASEAN Leadership Forum (see below): organizations and enterprises with (i) explicit social and environmental objectives, (ii) cooperative and associative relations among members and the community, (iii) democratic self-management, and (iv) values of solidarity and buen vivir.

Significant differences in perspectives on SSE were evident throughout the four-day event, not least the focus in Southeast Asia on inclusive growth via micro and small enterprise development, and Latin American perspectives that emphasize the importance of collective action, democratic self-management and the need for deeper systemic change. Views also diverged on the centrality and performance of cooperatives. I suggested that just as there are varieties of capitalism, so too are there varieties of SSE, each with its own strengths, weaknesses and challenges. Learning about SSE needs to move beyond a focus on best practices. Better understanding of the multiple tensions that can arise as SSE expands is crucial for SSE to realize its significant potential as a more inclusive and sustainable pathway to development. As governments become more interested in SSE, critical analysis of SSE-state relations is also essential to ensure that the SSE agenda is not seen narrowly as an instrument for poverty reduction and social protection. The potential of SSE also relates to the imperative of distributive and environmental justice. Indeed, a re-reading of the acronym RIPESS might indicate six core elements of such a transformative agenda: Resilience, Integrative development, Political Empowerment, Economic empowerment, Surplus redistribution and Solidarity.