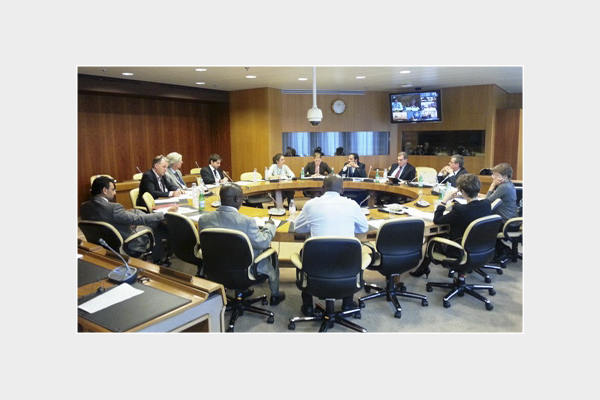 The founding meeting of the UN Inter-Agency Task Force on Social and Solidarity Economy took place on 30 September 2013 in Geneva. This is a new inter-agency partnership that aims to assist countries, mobilize political will and enhance momentum towards mainstreaming the issue of SSE in international and national policy frameworks.

The Inter-Agency Task Force on Social and Solidarity Economy is a concrete result of the conference “Potential and Limits of Social and Solidarity Economy”, held in May 2013. At the conference, researchers, policy makers and civil society actors discussed how SSE can contribute to local development, food security, gender equality, environmental protection and health care provisioning.

United Nations agencies at the May conference (including UNRISD and FAO, ILO, UNDP and UN-NGLS) agreed on the necessity to raise awareness and visibility of social and solidarity economy within the UN system, noting that attention there tends to be fragmented and has not matched the growing interest in SSE among other sectors of the development community.

“Social and solidarity economy”, or SSE, refers to organizations that have explicit economic, social and often environmental objectives, and involve various forms of cooperation and solidarity. These include cooperatives, women’s self-help groups, social or community enterprises, fair trade networks and associations of informal economy workers.

Globally, such alternative forms of production, finance and consumption are growing in response to social, economic and environmental crises and contexts of vulnerability. Recognizing the development potential of SSE, many governments and regional bodies are responding with initiatives to create an enabling environment for SSE enterprises and organizations.

As the United Nations discusses the contours of the post-2015 development agenda, and given the search for complementary paths to development that simultaneously foster economic dynamism, social and environmental protection and socio-political empowerment, there is clearly space for the UN system to give more coordinated attention to the potential of SSE.

“In the UN now, all eyes are on the elaboration of a post-2015 development agenda. In DESA, [we] are actively engaged in the process and are trying, whenever possible and relevant, to highlight the role of cooperatives and SSE in contributing to socioeconomic development. We promote this idea not as a theoretical concept, but as a very concrete, practical step and a set of policy measures,” explained Ms. Wenyan Yang (Chief, Social Perspective on Development Branch, Division for Social Policy and Development, UN-DESA).

At the founding meeting of the Inter-Agency Task Force on Social and Solidarity Economy, the convenors—UNRISD, ILO, UNDP Geneva Representation Office and UN-NGLS—were joined by representatives of FAO, TDR (the Special Programme for Research and Training in Tropical Diseases),UNAIDS, UN-DESA, UNESCO, UNEP, UNIDO, UN Women, WFP and WHO.

In a meeting that was both productive and inspirational, participants agreed on the objectives, roles and activities of the Task Force. In working towards its objective of assisting countries, mobilizing political will and enhancing momentum towards mainstreaming the issue of SSE in international and national policy frameworks, the members will undertake collaborative activities that aim to:

The work of the Task Force will take into account country priorities and circumstances, in consultation with national partners.

Task Force members are already engaged in an exercise to map SSE-related work under way within the UN system. Examples include UNRISD research on SSE, the work of the ILO Cooperatives Unit and SSE Academy UN-NGLS work on complementary currencies, UNDP work on social economy in Central Asia and Latin America, FAO work on producer organizations and cooperatives, and UNIDO work on youth-led start-ups that include social and environmental aims.

According to Mr. José Manuel Salazar-Xirinachs (Executive Director of the ILO’s Employment Sector), “A sustainable response to the crises should promote instruments that can advance both economic and social aims while fostering solidarity. This kind of integrative approach is … shared by many UN agencies. The potential of SSE organizations and enterprises may prove to be crucial, particularly in this context”.